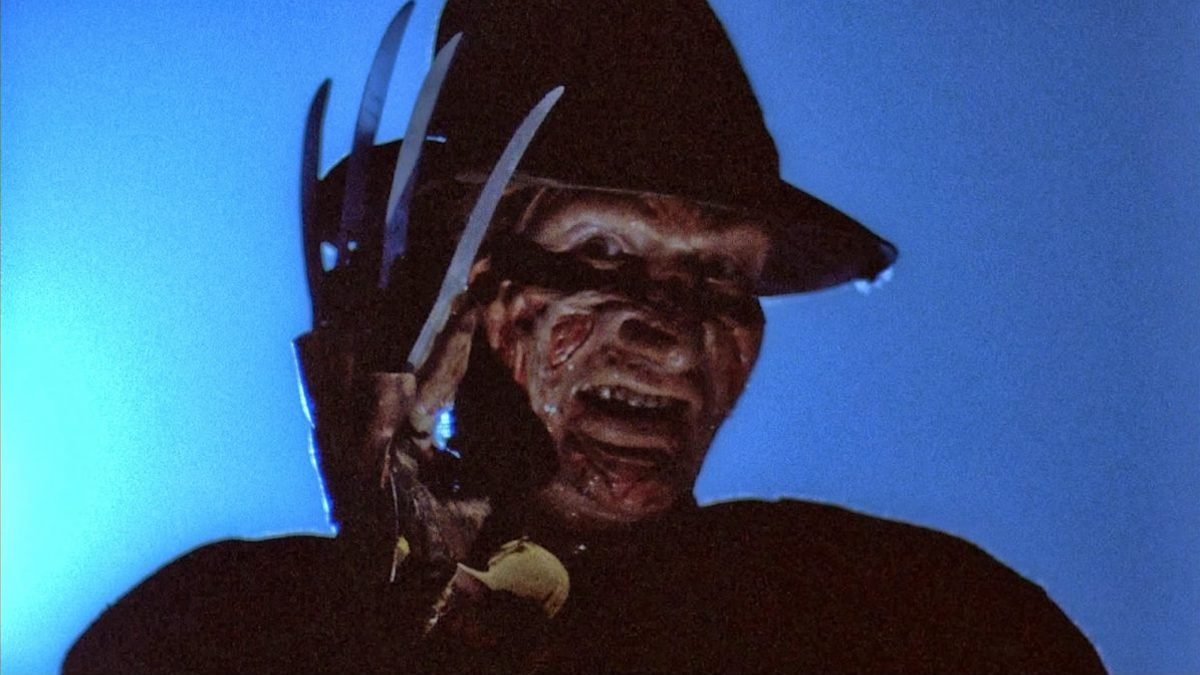 In honor of our upcoming June 5th A Nightmare on Fourth Street fundraising marathon–featuring eight films from the A Nightmare on Elm Street franchise–we’re taking a look at 10 iconic kills from this beloved slasher horror franchise, examining the most unique, gruesome, and, at times, comical deaths of the original series

A Nightmare on Elm Street (1984)
Unlike other victims on this list, you don’t see Glen (Johnny Depp in acting debut) die. Freddy’s claws come up from underneath Glen and drag into a hole in his bed. Suddenly, a gigantic blood geyser sprouts from the hole, overtaking the room. Though it was an extremely dangerous scene to shoot–with a crew member being electrocuted during production–it’s by far one of the most surreal deaths in a Nightmare film.

A Nightmare on Elm Street 3: Dream Warriors (1987)
This kill gives the most quoted Freddy line, “Welcome to prime-time, bitch”. However, this kill could also count as two kills in one. As Jennifer starts to drift to sleep, while watching a television interview between famed talk show host Dick Cavett and actress Zsa Zsa Gabor, Dick turns into Freddy, about to kill Zsa Zsa, but the screen goes static. Then, Freddy slams Jennifer’s head into the television, shocking her to death. A kill that worked perfectly with the bulky electronics of the era.

A Nightmare on Elm Street 3: Dream Warriors (1985)
Taryn, a recovering drug addict that gets into a knife fight with Freddy, showing no fear as she stabs him. However, when Freddy reveals his fingers have turned into drug filled syringes, she slips into her fear, immediately giving him the power to transform her arm’s track marks, into little mouths hungry for the drugs. He injects her with the drugs, slowly killing her, leaving those with a fear of needles, cringing at the edge of their seats.

Freddy’s Dead: The Final Nightmare (1991)
While many of the deaths on this list do contain an element of comedy, this is a funny scene overall. The hearing-impaired Carlos gets his hearing-aid back from Freddy, but it turns into a spider like creature clinging to his ear, amplifying every noise to an unbearable level. Acting like a Loony Toons cartoon character, Freddy taunts Carlos by dropping pins with cartoonish sound effects. Then, Freddy gleefully scratches his claws on a chalkboard, leading to Carlos’ head exploding. As irritating as that scratching noise is, the goofy way Freddy acts, makes it comical.

A Nightmare on Elm Street 5: The Dream Child (1989)
As Dan tires to escape Freddy on a motorcycle, the motorcycle is really Freddy in disguise. The motorcycle takes over Dan, painfully stabbing itself into his limbs, face, and hands, absorbing his blood, and making him a part of the motorcycle. A kill so gruesome, it was heavily edited by the MPAA (Motion Picture of America Association) in the original film debut. However, this controversial kill can now be seen, unedited, in all its horrific glory.

A Nightmare on Elm Street 3: Dream Warriors (1987)
Taking advantage of Phil’s love of marinate puppets and his sleepwalking habits, Freddy rips veins out of Phil’s limbs, and controls him like a puppet. Seeing the veins close up, makes your skin crawl. Phil tries to resist, but is overpowered and taken to a high window. Freddy cuts the veins like strings, and Phil falls to his death, making it appear that he’s going to commit suicide. What makes this scene far more gut-wrenching is how helpless and unable the Dream Warriors are to stop Phil’s death.

A Nightmare on Elm Street 4: The Dream Master (1988)
Without a doubt the most visually complex and dramatic display of Freddy death. It’s a superb kill, combining the use of different effects, including live actors and radio-controlled limbs. With Alice’s help, the souls of Freddy’s victim destroy him from the inside out, breaking his jaw wide open, allowing their souls to escape. As gory as it can seem, it’s also a scene of triumph for the victims, as they are no longer under Freddy’s control. And, hearing the voices of the child victims, some laughing, while others cry for their mom, as they float away, also makes the defeat that much more rewarding and eye-watering.

A Nightmare on Elm Street 2: Freddy’s Revenge (1985)
While sleeping in Ron’s room, Jesse suddenly wakes in unbearable pain. As Ron is unsure of how to react to Jesse, as Freddy slowly rips out of Jesse’s chest and kills Ron, by stabbing him through his bedroom door. It’s a stomach-turning Freddy entrance, with the lead up to Ron’s kill being far more terrifying than the kill itself. The terror is increased when it’s revealed that Freddy possessed Jesse to kill Ron and is covered in his blood. Freddy’s reflection can be seen in the wall mirror taunting and laughing at Jesse, making the kill that much more disturbing.

A Nightmare on Elm Street 4: The Dream Master (1988)
Considered by many as the grossest kill of the Nightmare series, there are visual similarities between this scene and other iconic horror scenes. For instance, Debbie’s slow and painful transformation into a cockroach, resembles the werewolf transformation in An American Werewolf in London. Audiences cannot help but to feel Debbie’s pain and cringe, as her arms fall off, unveiling cockroach legs. Also, like The Fly, viewers see and hear an insects-human hybrid’s spine-chilling call for help, knowing that they cannot be saved. After seeing Freddy squish Debbie to death in a roach motel, you will not be able to look at bug traps the same away again.

A Nightmare on Elm Street (1984)
Both the first kill for the Nightmare series and the most infamous. Tina is stabbed by Freddy in her nightmare. He drags Tina on her bedroom’s ceiling, before dropping her lifeless body on her bed. This iconic kill scene was filmed in a rotating set, without CGI, mystifying viewers. Fun fact, this scene was inspired by the classic Hollywood musical star Fred Astaire’s ceiling dance from Royal Wedding. It’s also listed by New York Magazine’s entertainment site Vulture as one of “The 100 Scares That Shaped Horror”.