Special Event
R Play trailer
Back To What's On 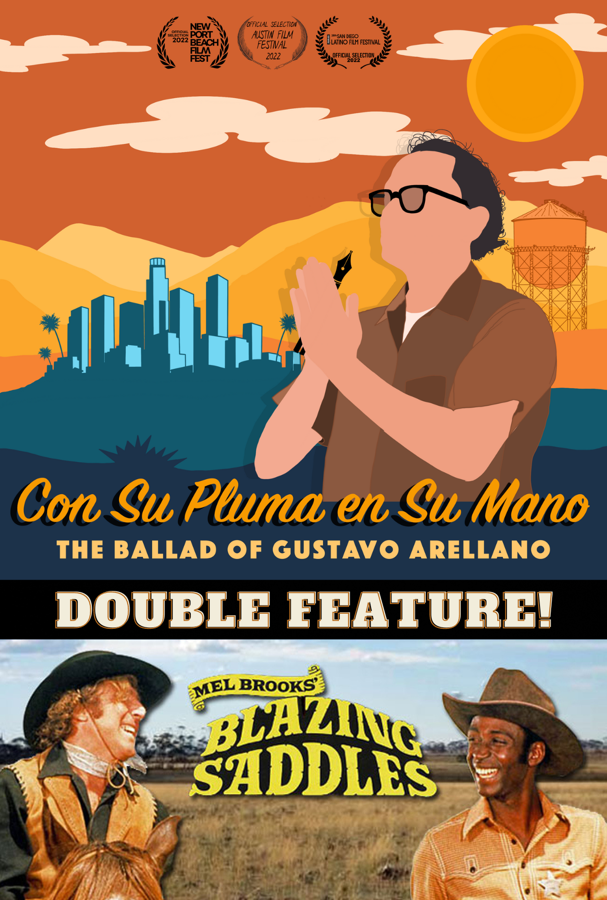 Join us Friday, February 3rd for a Birthday Celebration, a Documentary Big-Screen Premiere, a Classic Comedy, and a Fundraiser -- all rolled into one! We're celebrating Gustavo Arellano's birthday with a double-feature of director Brendan Bubion's documentary short Con Su Pluma en Su Mano: The Ballad of Gustavo Arellano, followed by a screening of Gustavo's favorite comedy, Mel Brooks' Blazing Saddles -- presented on 16MM!

7:50PM: Conversation and Q&A with Brendan Bubion and Gustavo Arellano

8:30: Blazing Saddles, with an introduction by Gustavo Arellano as to why he selected it for this event!

About Con Su Pluma en Su Mano: The Ballad of Gustavo Arellano One of the most prolific Latino journalists in America, Gustavo Arellano, faces the challenges of a changing landscape in journalism while trying to stay true to his principles and unique voice. A documentary short by Brendan Bubion.

In this satirical take on Westerns, crafty railroad worker Bart (Cleavon Little) becomes the first black sheriff of Rock Ridge, a frontier town about to be destroyed in order to make way for a new railroad. Initially, the people of Rock Ridge harbor a racial bias toward their new leader; however, they warm to him after realizing that Bart and his perpetually drunk gunfighter friend (Gene Wilder) are the only defense against a wave of thugs sent to rid the town of its population. An irreverent, daring, and hilarious comedy by the legendary Mel Brooks.