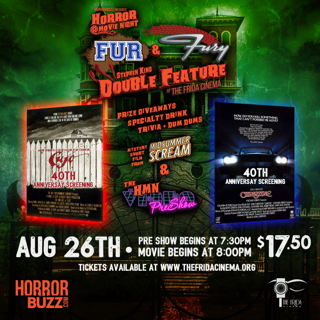 Cujo Man's best friend turns into his worst enemy when sweet St. Bernard Cujo is bitten by a bat. As Cujo morphs into a dangerous rabies-ridden beast, Donna (Dee Wallace) gets caught in Cujo's crosshairs on a fateful errand with her son, Tad (Danny Pintauro).

"The movie is as nasty and single-minded as Cujo himself: It's simple, and it works." - Adam Nayman, The Ringer

"It's a stripped-down nerve-shredder of a movie that has a bite every bit as potent as its bark." -Tom Beasley, VultureHound

"Proves Carpenter's mastery of both mood and the widescreen frame." - Nick Schager, Lessons of Darkness

"One of the more effective screen treatments of the era, however corny or preposterous it may remain on paper." - David Keyes, Cinemaphile.org