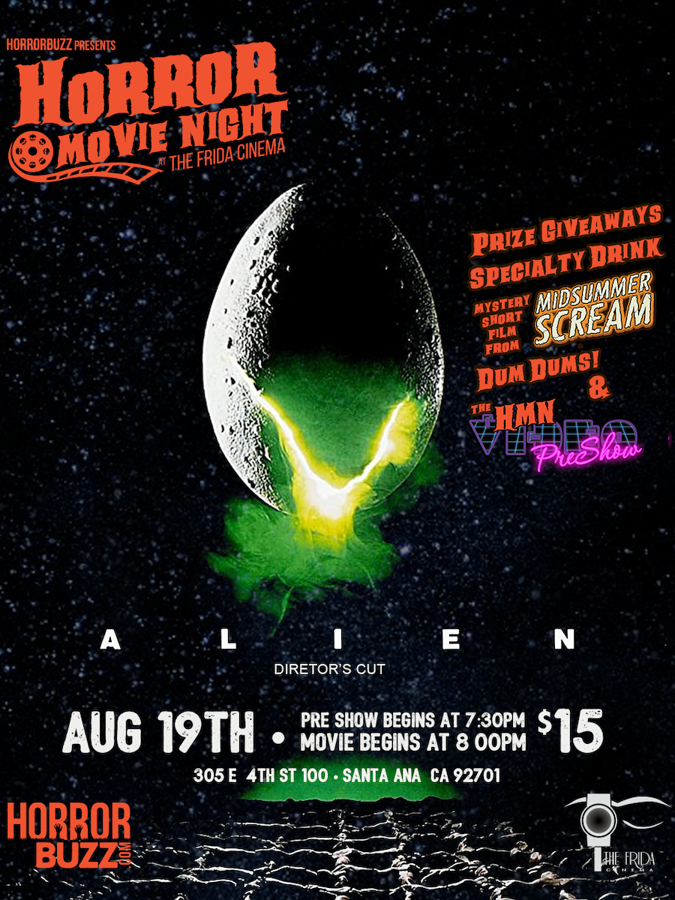 HorrorBuzz's Horror Movie Nights takes to the stars with the Director's Cut of Alien, Ridley Scott's 1979 science fiction horror classic! Be sure to arrive early for a special preshow before the film!

As the crew of the Nostromo, a space merchant vessel, travels back to Earth, they are awoken from their deep sleep to a distress call from the nearby planet LV-426. Led by Captain Dallas (Tom Skerritt) and Warrant Officer Ellen Ripley (Sigourney Weaver in a breakthrough performance), the Nostromo crew discovers that the distress transmission was actually a horrific warning: there is something on the planet, a being that should have never been awoken and unearthed…

Essentially a slasher film set in space, Alien was selected for preservation by the Library of Congress in the United States National Film Registry, noting the film as being “culturally, historically, or aesthetically significant.”

“One of the great strengths of 'Alien'is its pacing. It takes its time. It waits. It allows silences (the majestic opening shots are underscored by Jerry Goldsmith with scarcely audible, far-off metallic chatterings). It suggests the enormity of the crew's discovery by building up to it with small steps…” – Roger Ebert, Chicago Sun-Times

“Where 2001 and Close Encounters suggested that humanity would bring its best impulses and brightest hopes beyond the clouds, Alien served as a reminder that its worst fears would also be part of the package.” – Keith Pipps, AV Club

“A haunted-house movie set in space, Alien also has a profoundly existentialist undertow that makes it feel like a film noir — the other genre to feature a slithery, sexualized monster as its classic villain.” – Andrew O'Hehir, Salon.com