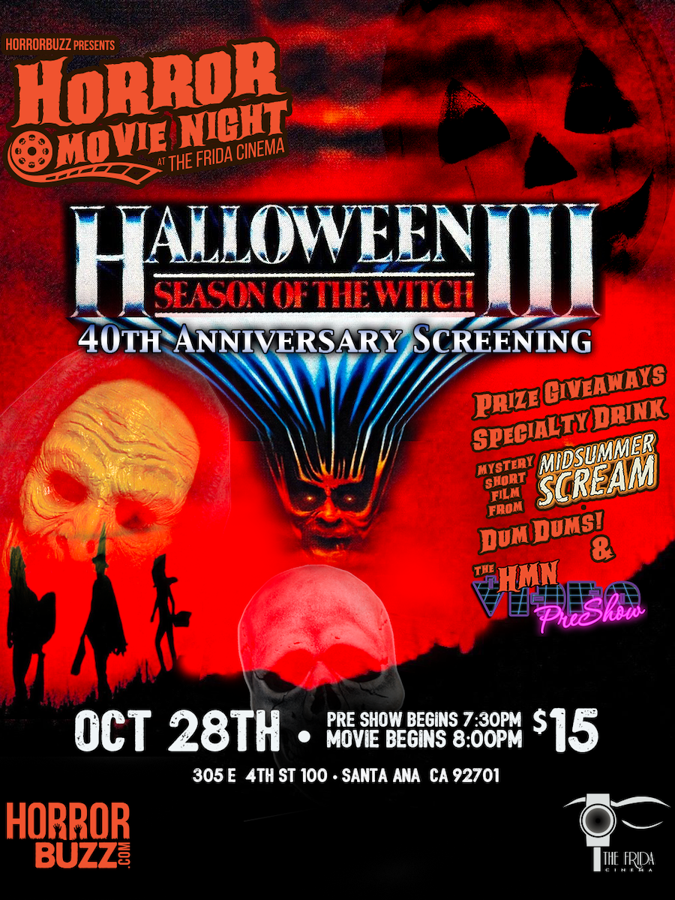 HorrorBuzz's Horror Movie Nights celebrates the spooky season with Halloween III: Season of the Witch, the cult classic third entry in the popular franchise! Be sure to arrive early for a special preshow before the film!

Dr. Daniel Challis and Ellie Grimbridge stumble onto a gruesome murder scheme when Ellie's novelty-salesman father, Harry, is killed while in possession of a halloween mask made by the Silver Shamrock mask company. The company's owner, Conal Cochran, wants to return Halloween to its darker roots using his masks -- and his unspeakable scheme would unleash death and destruction across the country.

Initially rejected by critics and fans for not featuring Michael Myers, Halloween III: Season of the Witch has since been reappraised as a clever throwback to anthology-style sci-fi/horror like The Twilight Zone and Night Gallery.

“Halloween III: Season of the Witch, no matter how different and unexpected and strange it was (and precisely for those reasons), came as a blessed relief.” – Jim Knipfel, Den of Geek

“It's a movie about the widespread death and destruction via techno-magic and it's just a huge disappointment that it took years after its initial release for Halloween III to find an audience.” – Charles Webb, MTV

“Halloween III: Season of the Witch is a horror movie worth discovering, revisiting, and most importantly experiencing.” – Toussaint Egan, Polygon