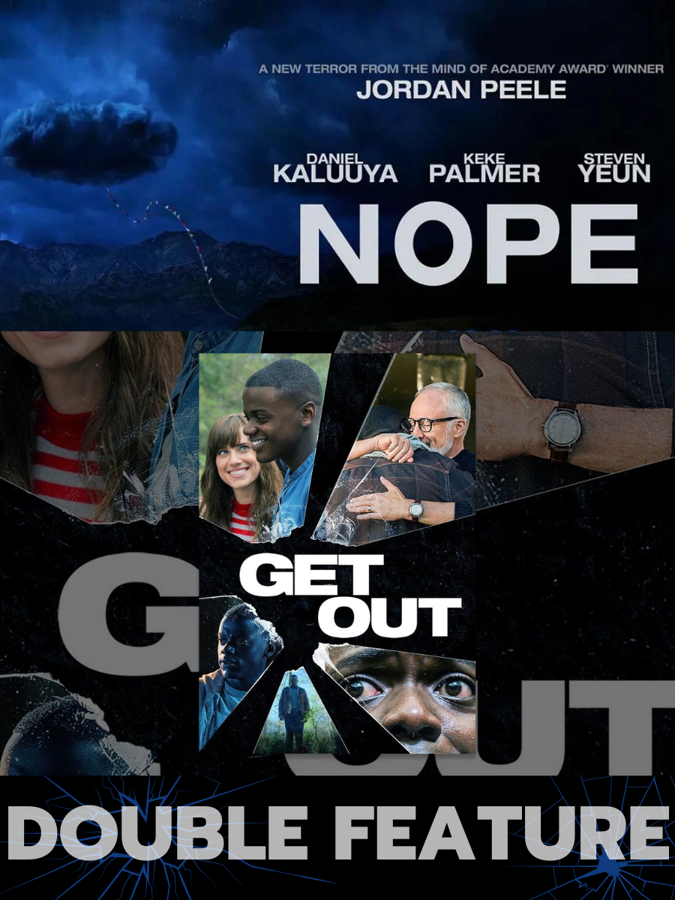 Get a double dose of chills with a Jordan Peele double feature of Nope and Get Out!

In Nope, two siblings OJ Haywood (Daniel Kaluuya) and Emerald (Keke Palmer) inherit their father's California ranch after he is struck and killed by an unknown object that fell from the rural sky. The siblings suspect that UFOs are the reason behind their father's mysterious death. Uncontrolled supernatural occurrences eventually start affecting both human and animal behaviors on the ranch without reason.

Get Out starts with photographer Chris (Daniel Kaluuya) asking his white girlfriend, Rose (Allison Williams) if her parents, who they're going to visit, know he's Black. Rose laughs the question off: they aren't racist, she claims, far from it. Once at the house and mingling among the friends and family of Rose's charming parents, Chris starts to notice…strange behavior, both from the way the white people treat him and the empty eyes of the Black guests. As the vibes get even more claustrophobic, he decides to take some advice frantically given: Get out.

“Brimming with tension but laced with gaiety so as to never feel hostile, Nope is an operatic and sweeping thriller that celebrates cinema and simultaneously condemns it as an industry built on obscured violence.” - Eric Francisco, Inverse

“[Nope] Feels like a modern take on a classic sci-fi story that would have made a really fantastic episode of The Twilight Zone.” - Patrick Hicks, Feelin' Film Podcast

“One of the most original and refreshing films to hit the cinema in years. Jordan Peele's feature debut works as a smart dark comedy, satire and psychological thriller, touching on very relevant issues today.” – Fico Cangiano, CineXpress