Crime
NR Play trailer
Back To What's On 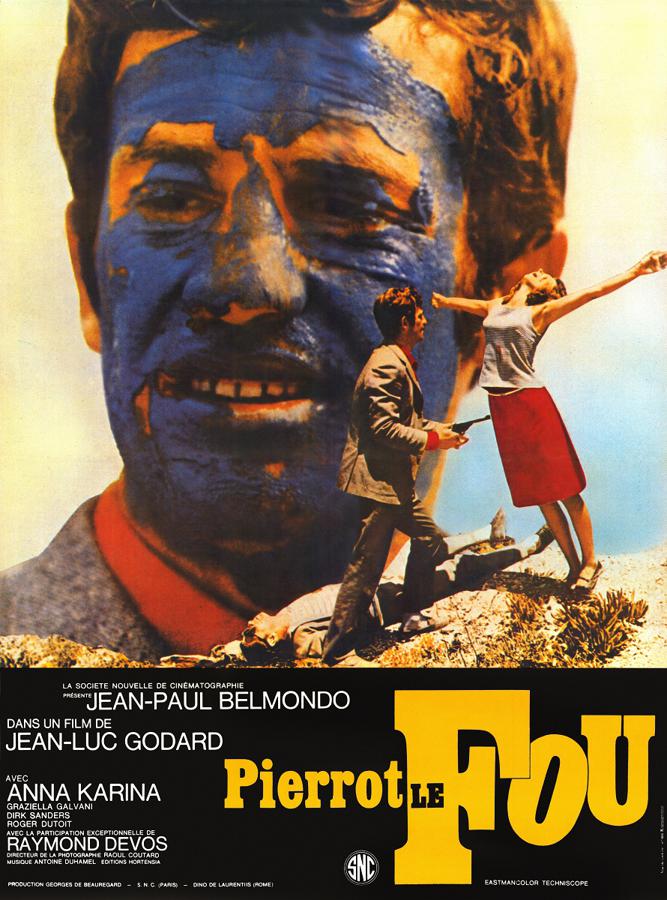 Dissatisfied in marriage and life, Ferdinand (Jean-Paul Belmondo) escapes the trappings of modern French life with his ex-lover, Marianne Renoir (Anna Karina), by abandoning the city for the woods. Their quest for philosophical meaning devolves into a crime spree through the French Riviera as they try to outrun both police and Algerian hitmen. An adaptation of Lionel White's 1962 novel, Obsession, Pierrot le Fou is rendered as a mashup of anti-consumerist satire, au courant politics, and comic book aesthetics, producing a violent, zigzag tale of, in Godard's words, “the last romantic couple.”

With blissful color imagery by cinematographer Raoul Coutard, and Belmondo and Karina at their most animated, Pierrot le Fou is one of the high points of both '60s French New Wave and Godard's entire body of work.

“Godard filmed the genre elements of the story with an inert mechanicalness and a conspicuous boredom, which he masked with elaborate editing, insert shots, and voice-over; but in the scenes of Godard's own making, in which he did not have to connect the narrative dots, he created a free and flamboyant array of images that were filmed with a manifest burst of untrammeled creation.” – Richard Brody, Criterion

“I was 15 when I first saw Pierrot le Fou. I had no idea who Godard was. I'd only vaguely heard of 'auteur films.' […] I didn't know a film could be a work of art. I walked into Pierrot le Fou because I liked the title. I watched that film and it was so completely different. I felt like it was talking to me. It was poetry. […] I walked out of that theater thinking, 'I want to make films too.'” – Chantal Akerman, filmmaker

“The film, alas, is banned to children under eighteen. Reason? Intellectual and moral anarchy.” – Jean-Luc Godard