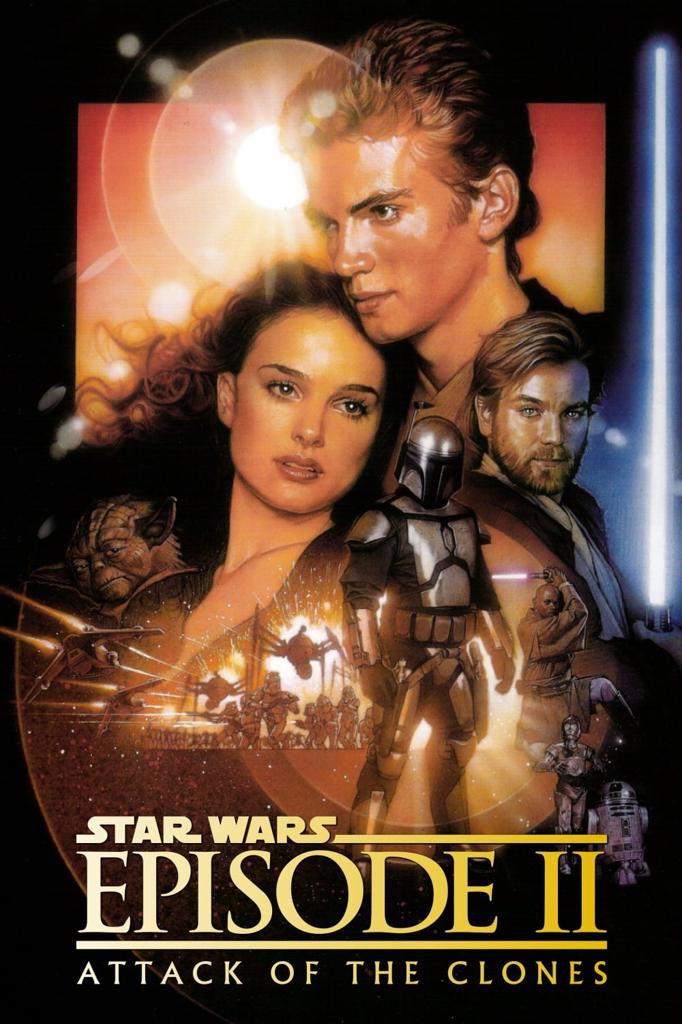 When an assassination attempt is made on Senator Padmé Amidala's (Natalie Portman) life, the galaxy is thrown further towards the fringes of civil war. After Obi-wan Kenobi (Ewan McGregor) and his apprentice, Anakin Skywalker (Hayden Christensen), are enlisted to protect Amidala, Kenobi is sent by the Jedi Council to investigate as Amidala and Skywalker fall into an intimacy that blossoms into uncontainable love. But the discovery of a mysterious bounty hunter and the sinister workings of a new Separatist movement led by Count Dooku (Christopher Lee) plants the trio directly in the path of an army of clones, and a war threatens to pull the entire galaxy into oblivion.

One of the first major motion pictures to be shot in HD digital video, George Lucas ushers in groundbreaking technology to continue a saga as operatic in its spectacle as it is in its cosmic melodrama.

“The latest entry in George Lucas' transgalactic saga of the moral rise and fall of Anakin Skywalker and the deterioration of democracy into despotism has an electric visual majesty and boasts Lucas' best direction since American Graffiti.” - Michael Sragow, Baltimore Sun

“It's impossible […] to dismiss a film with this much stuff: exotic production design, imaginative characters, and a wide variety of digital jedi fu.” - Peter Canavese, Groucho Reviews

“The very foundation of Lucas's cinematic philosophy [is] newness – this comes through in his obsession with technological possibilities, and through his genuinely childlike pursuit of spectacle and wonder. His work is both pre- and post-cynical, operating within literary forms that predate cinema by several centuries while also looking toward a new kind of film whose form hasn't even been realized yet.” - Mike Thorn, Bright Lights Film Journal