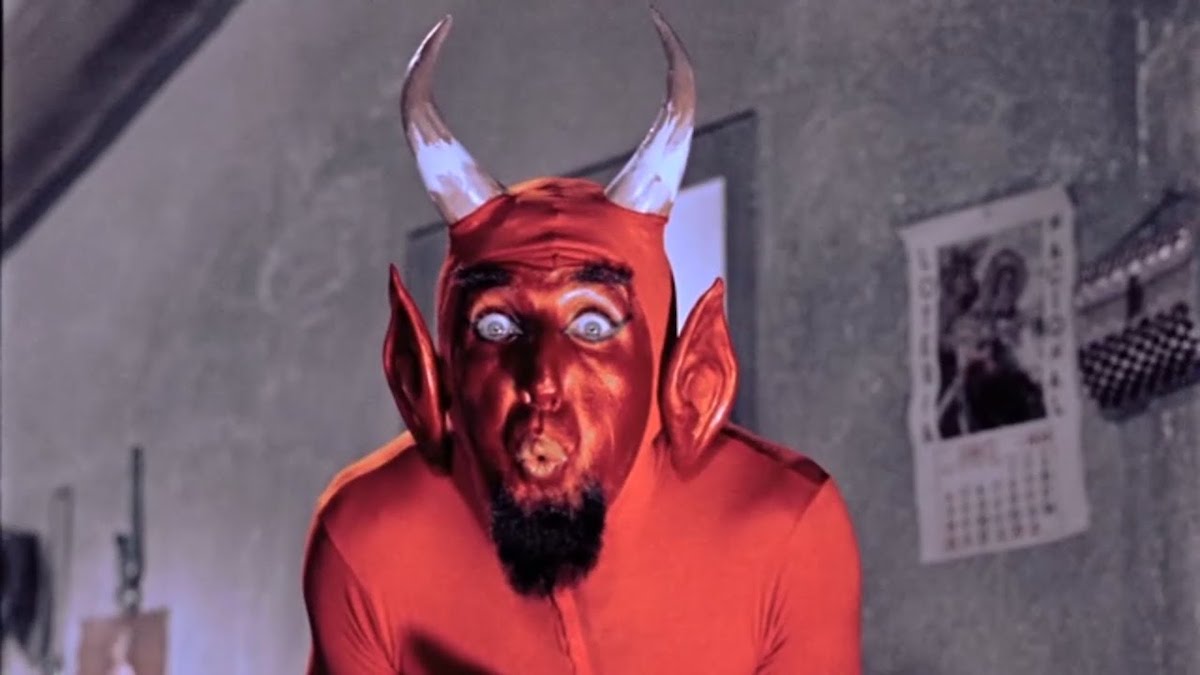 Like all good things, Christmastime must come to an end but we at The Frida Cinema have come up with a fun way to keep the holiday spirit going!

Just two days after Christmas day, we’ll be holding a Twisted Christmas triple feature! Presented in conjunction with Dark Alley Productions and Ghost Party Pictures, this special event will feature drinks, vendors, and photo ops with some twisted Christmas characters. Keep an out for monsters though as they’ll be lurking in the pine trees and doing their best to give you a holiday fright. If you stay strong and brave the scares, you’ll get to see three of the most off-the-wall movies to ever grace the holiday season. On top of all this, proceeds from this event will go towards sending the Frida’s operations staff to next year’s Art House Convergence, so you’ll also be helping out a good cause by coming out for it.

If all that wasn’t enough to sell you, take a look at the cult Christmas classics we’ll be screening that night!

Before Halloween, there was another holiday-themed horror film that left viewers on the edge of their seats with its depiction of a deranged killer stalking and murdering young women. That movie was Black Christmas, an independent Canadian production from Bob Clark. Yes, the same guy behind Baby Geniuses directed one of – if not the first – slasher movies ever, and to shockingly eerie effect no less.

Set just weeks away from Christmas, the film focuses on a group of sorority sisters who receive a series of disturbing calls as a mysterious figure (identified simply as “Billy”) kills them one by one. If the premise sounds vaguely familiar, it’s because it’s based on the classic urban legend of the babysitter who receives threatening calls only to discover that they’re coming from upstairs. Although the girls don’t discover this until well into the movie, the audience knows that Billy is inside the house from the very beginning thanks to numerous scenes shot from his perspective. Shaky but deliberate, the point-of-view shots convey his skewed view and fill viewers with a sense of unease as he makes his way through the house without the girls even suspecting as much.

Adding to the terror is the fact that we mostly hear Billy rather than see him. Much of the POV footage is accompanied by his labored breathing, giving the impression of an animal panting as it pursues prey. The real chills, however, come from the disturbing phone calls and in-person remarks he makes to the girls. Alternating between making obscene comments to them and acting out conversations between himself and someone named Agnes, the killer uses a wide range of voices that speak to his unhinged nature as well as creep the bejesus out of anyone unfortunate enough to hear them.

This chilling story is further fleshed out by commendable performances from several surprisingly familiar faces. 2001’s Dave, Keir Dullea, appears as put-upon pianist Peter and Margot Kidder (none other than Lois Lane in Richard Donner’s Superman) steals every scene she’s in as Barb, a particularly provocative member of the sorority. John Saxon, meanwhile, follows up his iconic turn as Roper in the previous year’s Enter the Dragon with a suitably commanding performance as Lt. Fuller. The heart of the cast, however, is Olivia Hussey. Perhaps best remembered as Juliet in Franco Zefferilli’s Romeo and Juliet, she stars here as Jess, a straight-shooting heroine who serves as a worthy predecessor to female leads in later slashers.

As others have pointed out in previous blog posts, Clark also directed A Christmas Story, and even here one can get a feel for his comedic tastes. Said tastes seem to gravitate towards the crude, with the funniest example being when Lt. Fuller finds a paper with a crude name on it and realizes that one of his subordinates cluelessly took it down when Barb gave it to him. Clark wisely lets diversions such as these remain just that, giving viewers just enough respite from the horror happening elsewhere.

Filled with enough of Clark’s characteristic humor to make the masterfully-crafted creepiness bearable, Black Christmas makes for perfect holiday horror viewing – although you might want to watch it in the light of Christmas Day rather than during the dark of Christmas Eve.

The next installment of the triple feature is also seen as a predecessor to another, more well-known film. With its premise of a young boy defending his home from an ill-intended intruder during Christmastime, Rene Manzor’s Dial Code Santa Claus would be called a shameless rip-off of Home Alone were it not for the fact that it actually came out a year before that movie. Indeed, the basic set-up is so similar that Manzor felt compelled to sue Chris Columbus and company for “remaking” his film but the truth is that there’s enough differences stylistically and narratively to differentiate Home Alone from its French antecedent.

Have you ever noticed how movies made in the early 90s still kind of seem like they’re set in the 80s? Dial Code produces the opposite effect, thanks partly to its child protagonist. With his smart-aleck attitude, penchant for inventing gadgets, and pronounced mullet, Thomas could easily be the lead in a 90s family film. The influence of the 80s is still present in the form of homages to Rambo and a synth-heavy score that appropriately switches from saccharine to sinister, yet the overall spirit of the film, with its elements of preteen rebelliousness and wish fulfillment, is very much of the following decade.

The film is decidedly un-90s, however, in its depiction of violence. Indeed, it gives us an idea of just how high the stakes are the moment the antagonist, a disturbed vagrant who disguises himself as Santa, encounters Thomas’ dog JR. Instead of JR, say, biting him in the rear end or something similarly humiliating that you might expect from a movie with a premise like this one, “Santa” stabs him, with JR audibly whimpering as Thomas helplessly watches. We already know the bum’s not a good guy at this point, but the sheer cold-bloodedness with which he dispatches JR is shocking enough to transform him from an amusingly-absurd villain to a serious threat, made all the worse by the fact that he’s deliberately targeting a kid for murder.

As far as horror villains go, the movie’s Santa is one of the most unexpectedly effective. Although he doesn’t rack up the substantial bodycount that Billy does in Black Christmas, he has a relentless quality that makes him no less menacing. Thomas snares him in one of his traps but he somehow finds a way out: the boy shoots him in the leg but he’s still able to limp after him. He’s not quite at Michael Myers levels of invincibility, but he’s either durable or just plain lucky enough that he might make some wonder if there really is something supernatural about this Santa.

A darkly comedic thriller that blurs the line between fantasy and fright, Dial Code Santa Claus is a home invasion film fit for the holiday season as well as fans of strange cinema in general.

As bonkers as Dial Code Santa Claus is, it’s an exercise in restraint and realism compared to the third and final installment of our triple feature. Innocuously named, Rene Cardona’s Santa Claus is anything but: it has a Santa who lives in outer space, robotic reindeer, and a villain straight from Hell. No really, Santa’s opponent is a devil named Pitch, creatively rendered not as a femme fatale or disembodied voice but as an impish, red-skinned humanoid who looks like he hopped off a Loteria board. Considering the movie’s Mexican origins, it’s amusing to assume that this was intentional on the filmmaker’s part.

While the obvious comparison is the far more infamous Santa Claus Conquers the Martians, Cardona’s Christmas caper unbelievably manages to outdo that film in the weirdness department. As was previously noted, Santa lives in outer space – in a castle in outer space, to be more specific. Joining him in the castle are not elves and Mrs. Claus as more traditional tales would have it but the magician Merlin and a bunch of children who are there because… okay, the movie doesn’t try to explain why they’re there rather than at home with their families, so why should I? Joining them is a gaggle of interesting contraptions, including a telescope with an actual eye in it and a pair of particularly lascivious-looking lips that probably have no place in, well, anywhere, to say nothing of a family film.

There’s a lot of laughs to be had, as you probably can imagine, but what’s strange is how many of them are with the movie rather than at it. For sure, the overwhelming bulk are at the insane premise and incompetent execution of it, but believe it or not there are genuinely funny moments here that are indeed meant to be funny! Most of these moments involve Pitch and Santa, such as when the latter hears that the children of Earth think he’s too old to make his Christmas trip. Offended, Santa responds that the Devil is many centuries older than him, with his incredulous delivery given an even more humorous punch by the fact that what he says is actually very true.

On the subject of things that the movie does strangely right, I would like to bring up the dream sequence had by Lupita, one of the children on Earth. After rejecting Pitch’s advice to steal a doll she wants, he plants a dream in her head wherein she’s surrounded by presents that open to reveal dancing, human-sized versions of the doll. With the floor shrouded in mist and the presents assembled in a sort-of Stonehenge formation, it’s a surprisingly strong (and not a little scary) scene bolstered further by the unexpectedly competent choreography of the dancers and the creepy masks they wear.

Santa Claus, on the face of it, is not a great movie. What it is, however, is a mind-boggling viewing experience unlike anything else to come out of the Christmas season, and certainly one worth seeing on the big screen where you can revel in the lunacy with other equally-baffled viewers.