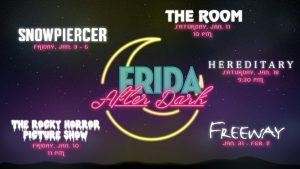 Happy New Year, folks! It’s a brand new decade, which means a whole new slew of programming for your favorite after-hours film series! FAD is starting 2020 off with a glorious lineup of dystopian sci-fi, underrated 90s gems, and samplings from both ends of the horror spectrum. With favorites old and new, this month is a great one for appreciating just how diverse entertaining cinema can be and how it can make you cry from both sadness and laughter.

Every Frida After Dark is a warp through time with our monthly presentation of The Rocky Horror Picture Show, the original interactive midnight movie. Ever talented and dedicated, the K.A.O.S. shadow troupe continues to turn Friday nights out with their lip-syncs, sexy costumes, and characters that bring you right into the world of Dr. Frank-N-Furter’s castle.

Rocky Horror is a mish-mash of campy science-fiction, brilliant songs, cheesy wordplay, and unapologetic sexuality that just might awaken something in you. Along with being fun and wild, these screenings are about community and the freedom to be yourself! Costumes are always encouraged, so put on the best Transylvanian duds you’ve got and bring along your friends for an awesome night out.

Don’t forget to bring cash to buy your prop bags before the show! For just a few bucks, you can have plenty of ammo to throw while also supporting K.A.O.S. and helping to improve their costumes and stage gear. If you’re a Rocky virgin, don’t get hot and flustered! Check out this classic guide for what to expect when going all the way with us at midnight. Half the fun is in the pre-show, so don’t skip the foreplay!

Right after cleaning up all the confetti and popcorn from Rocky, we’re making a mess all over again with an interactive screening of The Room, an absolute masterpiece of failure.

Unlike Rocky Horror, The Room is not a musical. Instead, it’s a film so terrible in every way conceivable that it’s hard to believe even while watching it. Perhaps that’s simply the genius of the enigmatic Tommy Wiseau: director, writer, actor, producer, casting director, etcetera, etcetera.

Johnny (Wiseau) works as a successful banker in stock-footage San Francisco with his fiancee Lisa (not Tommy Wiseau). Despite their engagement, Lisa is unhappy in her relationship and seduces Johnny’s best friend Mark. Despite the simple premise, there’s several dozen unrelated subplots that make things far more entertaining and worthy of a monthly cult classic celebration.

Think you know how bad it is? You don’t! It’s much worse, and live screenings are all the better for it! There’s truly nothing like being in a theater full of strangers, bonded together by the same bizarre dialogue and pelting each other with plastic spoons. So what are you waiting for? Grab a football and make a date for Saturday, January 11th — just make sure to close the front door on your way out!

Craving your monthly dose of existential dread? Well, you’re in luck because our pals at HorrorBuzz are presenting Ari Aster’s Hereditary for one night only! Few films can shake the human soul quite like Aster’s first feature film, starring Toni Collette in a performance on par with the most legendary of horror icons.

Without revealing too much to the uninitiated, Hereditary continues in the spirit of Aster’s short works The Strange Thing About the Johnsons and Munchausen. With only two feature film credits, the director is just one of many in recent years whose debut movies are some of the highest-rated auteur works of their genre. The thematic current running through the body of Aster’s work is not the terror of monsters that go bump in the night, but the stifled wounds lurking in our own hearth and home. Do our secrets really die with our relatives? Or is does it live in us, passed on through trauma generation after generation? Whether it be genetic relationships or romantic, the man taps into something that can hit some too close to home yet leave you yearning for more of it onscreen. Superfans of A24 could even make it a double feature with The Lighthouse to experience some of the best horror of the past decade back-to-back — from the unhinged domestic figure to burdensome masculinity among the endless sea.

The late Tobe Hooper gave a whole new face to The Texas Chainsaw Massacre world with his 1986 sequel, in case the Breakfast Club parody poster didn’t make the tonal shift clear enough. Tossing the eerie, documentary-style look of the first film immediately out the window, Texas Chainsaw II instead zigs where it could’ve zagged, providing an unbelievably entertaining parody of the original, featuring a whacky cast of characters with such quality names as Chop Top, Stretch, and Lefty. Need we say more?

Gather ‘round for an evening with our brothers from Bombs Away! as we revel in hilarious, B-movie goodness and discuss it with you right after with a live podcast taping! With a flick featuring cannibal funhouses, new members of the Sawyer family, Texan chili contests, and Dennis Hopper triple-wielding chainsaws, it’s a romp through the wild west with plenty to talk about.

If you’re a fan of over-the-top, ridiculous fun, or just want to witness Dennis Hopper act completely crazed out of his mind, you’ll definitely want to stop by the homestead Saturday, January 25th with all your kin.

The idea of updating classic fairy tales to contemporary settings is far from a hot take at this point. We’ve all seen a version of “Cinderella” where the girl loses her sneaker or a “twisted”, dark version of Alice in Wonderland. But I’d bet even the most out-of-the-box thinkers around would be hard-pressed to come up with this iteration of “Little Red Riding Hood” on the first few tries.

Freeway is a wild ride that could give Mr. Toad a run for his money. It tells the story of Vanessa Lutz, a red leather-wearing, basket-carrying illiterate teen, who finds herself parentless upon the arrest of her sex worker mother and molester step-father. Rather than being taken into the foster system, Vanessa runs away to get to her estranged grandma’s house in LA by (in a manner that I’m sure the Brothers Grimm, so “fond” of competent, assertive women as they were, would really appreciate) handcuffing the social worker and jacking a car. Surprisingly, this is actually just the set-up to get the plot rolling towards the plot’s many twists and turns.

Despite the synopsis sounding like something out of an exploitation film or Law & Order: Special Victims Unit, the movie is a seamless satire that actually comments on some of the legal system’s greatest injustices and the hypocrisy often found within the commodification of true-crime. Though campy with its stock sound effects and laughable 90s stereotypes, there’s more than meets the eye to this underrated gem.

With Reese Witherspoon in one of her best, endearing performances, a Danny Elfman score that somehow melds moments of rockabilly, jazz, and carnival tunes, and a happily ever after ending, Freeway is just the treat to finish off the first month of 2020.

With awards season in full swing, there’s no shame in hitting up some old cult faves or perhaps catching up and finally crossing some titles off of your watchlist. If you’re tired of making the matinee rounds, Frida After Dark is always here to spice up the night!

LOVE this theater..OMG. I’ve been here several times now for different events. I’ve attended 2 of the 3 Scott Pilgrim events thrown by Cinemattack. I was even the lucky winner of the Scott Pilgrim album on vinyl. I don’t have a record player..but may as well be a trophy for me because I never win anything! lol. I also attended “The Last Unicorn” event with Peter S Beagle- the author speaking and answering a Q and A afterwards. This was so awesome. I have always loved loved this movie and it was … END_OF_DOCUMENT_TOKEN_TO_BE_REPLACED