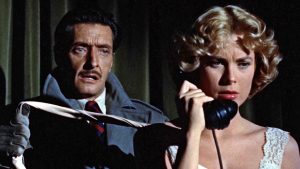 William Shakespeare, Tennessee Williams, Arthur Miller, and countless other playwrights throughout time have brought to life some of the best stories ever told. So naturally, filmmakers would take those stories from the stage to the screen. In these translations, filmmakers have to decide the best way to make these stories work on the big screen, especially for audiences experiencing these stories for the first time.

One way filmmakers can translate is by sticking to the small scale of theatre plays. A notable example is Alfred Hitchcock’s 1954 crime film Dial M for Murder, where a wealthy man plots the murder of his adulterous wife. Frederick Knott wrote both the film’s screenplay and the
1952 play the film was based on.

Knott’s experience as a playwright came through in the film’s limited settings. Nearly the entire film is set in one location, the home of the ill-intentioned man and his wife. Without the limits of the stage, Hitchcock could have added several more settings to make the story feel bigger. Instead, he stayed true to the film’s source material by keeping the story’s scale small. Thankfully, Hitchcock’s direction, the sharp script, and the actors’ performances prevented the film’s sole setting from becoming tedious throughout the film.

Another approach for filmmakers adapting plays is to go beyond the limits of the stage. Japanese filmmaker Akira Kurosawa took this approach with his 1957 film Throne of Blood. While it is not a direct adaptation, it is heavily inspired by Shakespeare’s Macbeth, a play about
a Scottish king whose ambition leads to his rise and fall. Instead of Scotland, the main character in Throne of Blood, played by the legendary Toshiro Mifune, is a lord in feudal Japan.

Instead of keeping in line with the small scale of the stage, Kurosawa used film to go beyond it. Throne of Blood is filled with large sets and props that would not be used on stage: castles, forests, real horses, etc. Instead of a handful of extras on stage, Kurosawa had dozens to recreate armies and battle scenes. Not only does this upgrade in scale make the world feel larger than it would have on the stage, but it demonstrates the power that these lords are fighting for.

Regardless of whether a filmmaker goes with either a small-scale or large-scale approach when adapting, just the presence of a camera allows filmmakers to do things that cannot be done on stage. Even though Hitchcock used a smaller scale for Dial M for Murder, he still used the camera to focus the audience’s attention. He would use close-ups so the audience could see important props such as a photograph or a key. On stage, this would not be possible as there is no camera to focus attention and the closest an audience member can get to a prop or actor is a front-row seat.

Even in the smaller-scale scenes in Throne of Blood, Kurosawa uses filmmaking techniques not available to the stage. Like Hitchcock, he uses the camera to focus the audience’s attention. In a scene where the main character sees the ghost of a deceased friend, the camera starts focused on an empty spot where the friend would have been sitting. The camera moves away from that spot and zooms in on the main character. The main character then reacts to something off-screen and the audience has to wait to see what he is reacting to as the camera moves back to reveal the ghost in that previously empty spot.

This scene also demonstrates how cameras can bring the audience closer to the actors. When we see the character’s reaction to the ghost off-screen, we can see the fear in his eyes more easily than an audience watching a play could have. The same can be said for Dial M for
Murder, as the camera lets viewers get closer to the characters in their home than watching them on a stage would. Cameras allow close-ups for the audience to get more intimate with the characters and appreciate their performances in a way that is not possible in plays.

Filmmakers have an abundance of ways of translating plays to the big screen, ranging from using the camera to focus attention that is not possible on the stage to increasing the scale of the story. While it is up for debate if this makes the film versions better than their source
material, it at least shows the differences in how the mediums tell stories.

LOVE this theater..OMG. I’ve been here several times now for different events. I’ve attended 2 of the 3 Scott Pilgrim events thrown by Cinemattack. I was even the lucky winner of the Scott Pilgrim album on vinyl. I don’t have a record player..but may as well be a trophy for me because I never win anything! lol. I also attended “The Last Unicorn” event with Peter S Beagle- the author speaking and answering a Q and A afterwards. This was so awesome. I have always loved loved this movie and it was … END_OF_DOCUMENT_TOKEN_TO_BE_REPLACED

I love the Frida, as an avid movie watcher, it’s great to have a place to go where many classic, cult and underrated films are shown. I had the pleasure of attending “The Decline of Western Civilization” screening with director Penelope Spheres doing a Q&A. Her films are so historically important and impacted me at a very young age. I am forever grateful for the experience, like nowhere else would this be possible. I think it’s truly amazing what the staff and everyone involved is doing for the … END_OF_DOCUMENT_TOKEN_TO_BE_REPLACED