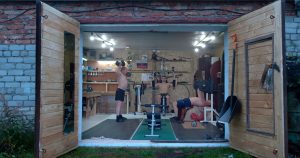 When it comes to expressing their individualism, American males have their “man caves” and the British their allotment sheds. But for certain rural Russians, it’s the garage that provides a window into their personal lives. Director Natalija Yefimkina spent four years earning the trust of her subjects in Russia’s far north. With a sociologist’s eye, she documents their special boltholes: one is used for breeding quails, another for the rehearsals of a punk band. There’s a metal workshop and one for carving wooden icons. Perhaps most surprising is the enterprising man who spent a lifetime excavating his space, so that it now encompasses four underground levels. It’s a legacy that he will bequeath to his grandson.

I love the Frida, as an avid movie watcher, it’s great to have a place to go where many classic, cult and underrated films are shown. I had the pleasure of attending “The Decline of Western Civilization” screening with director Penelope Spheres doing a Q&A. Her films are so historically important and impacted me at a very young age. I am forever grateful for the experience, like nowhere else would this be possible. I think it’s truly amazing what the staff and everyone involved is doing for the … END_OF_DOCUMENT_TOKEN_TO_BE_REPLACED