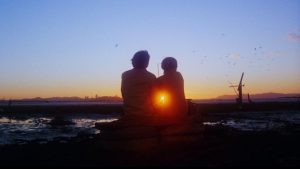 Harold has committed fifteen suicides. He tells his psychiatrist that it’s at least a rough  estimate. While these suicides are staged, he was nonetheless forced into an office by his mother,  who has gradually progressed from no longer wanting to bear them, to what is now a hefty  passiveness. The psychiatrist asks him to try and find a solution, and whether he does anything to  relieve himself of this presumed dread. Harold – proper in his wording, simply says that to do  just that, he goes to funerals. One of these is where he will meet Maude. She is almost seventy  years older than him. By the time this story ends, one of the most memorable, beautifully  bittersweet screen romances will have blossomed. And this year will be the fiftieth in which it  has continued to thrive.

It’s difficult to truly put into words the weight of Hal Ashby’s classic; arguably the finest  that gallows humor has ever been in 20th century media (and certainly an all-timer in cinema’s  great middle finger moments). I’ve spent two Valentine’s Days seeing it alone at the Frida, but  that loneliness couldn’t possibly be felt under the warmth provided by Cat Stevens’ sunny,  acoustic melodies and the gradual surfacing from the utter blackness enveloping Harold – boldly  performed in every facet by Bud Cort; all with the hand of his beloved Maude – personified with  the natural grace of Ruth Gordon, clearing 100% away from the Satanic psychodrama of  Rosemary’s Baby just three years prior, and into somewhere far more empathetic. Ashby’s film is  one that has absorbed itself in me over time. I knew it was love at first sight, but having my  viewings of it come at a time where I was beginning to understand my own shortcomings in  wanting to live, and how to fix that, cemented a place for it inside my own self. With heavy  inspiration taken from the wonderful poem very recently written about Argento’s Suspiria by our  own Sean Woodard, I feel that the best way for me to properly go about what this film means to  me is to take it to the stanzas. I hope there’s something in these lines that help others convey their  own feelings on the film. And if the feelings aren’t ones you have, then perhaps a trip to Tustin’s

Mess Hall Market to catch a drive-in screening of the film on Sunday, February 14th (yes,  Valentine’s Day!) will take you on the road to find out yourself. And now, a little something.

i feel its end
i feel the car crashing

What a hidden gem! I had such a lovely time at a recent showing of Godzilla (1954). This theater is a bit timeworn, yet undeniably quaint and charming with an unconventional feel. And interestingly enough, the audience served as the sweet element of surprise. Those in attendance created an atmosphere of delight, comfort, and personal acceptance… and get this.. there was an actual host who presented a brief preface to the film just prior to viewing. Very collegiate, which I loved!  All in all pe… END_OF_DOCUMENT_TOKEN_TO_BE_REPLACED