Now available via streaming!  Abramorama presents Herb Alpert Is…, director John Scheinfeld’s documentary profiling the shy, unassuming trumpeter and artist, mostly from the perspective of colleagues like Questlove, Sting, and Bill Moyers who reflect on a musician who is, in their own words, a musical, artistic and philanthropic heavyweight. 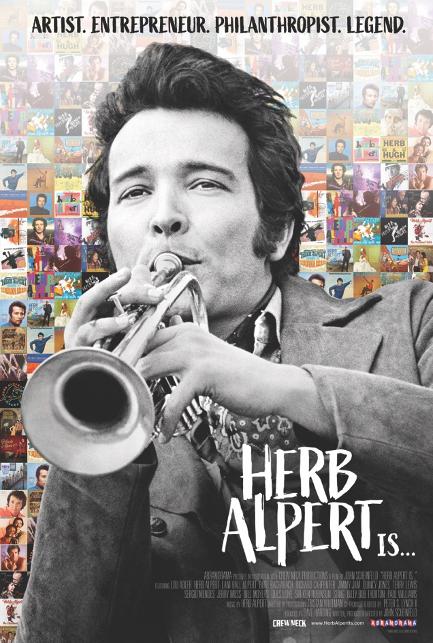 With his trumpet he turned the Tijuana Brass into gold, earning 15 gold and 14 platinum records. He has won nine Grammys Awards between 1966 and 2014, and received the National Medal of Arts from President Barack Obama in 2012. Alpert co-founded the indie label A & M Records with his business partner, Jerry Moss, which recorded artists as varied as Carole King, Cat Stevens, The Carpenters, Janet Jackson, Peter Frampton, Joe Cocker, Quincy Jones, Sergio Mendes, and The Police, going on to become one of the most successful independent labels in history. He has shown his striking work as an abstract painter and sculptor worldwide — and continues to do so at the age of 85. Through the Herb Alpert Foundation, he has given significant philanthropic support of educational programs in the arts nationwide, from the Harlem School of the Arts and Los Angeles City College to CalArts and UCLA.

Herb Alpert is… will be available on our Virtual Cinema through Thursday, November 12th. To purchase and stream, click the button below!

LOVE this theater..OMG. I’ve been here several times now for different events. I’ve attended 2 of the 3 Scott Pilgrim events thrown by Cinemattack. I was even the lucky winner of the Scott Pilgrim album on vinyl. I don’t have a record player..but may as well be a trophy for me because I never win anything! lol. I also attended “The Last Unicorn” event with Peter S Beagle- the author speaking and answering a Q and A afterwards. This was so awesome. I have always loved loved this movie and it was … END_OF_DOCUMENT_TOKEN_TO_BE_REPLACED