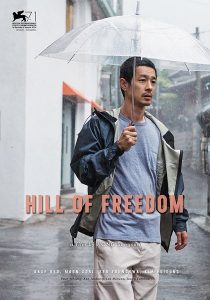 Kwon (Seo Young-hwa) returns to Seoul from a restorative stay in the mountains. She is given a packet of letters left by Mori (Ryo Kase), who has come back from Japan to propose to her. As she walks down a flight of stairs, Kwon drops and scatters the letters, all of which are undated. When she reads them, she has to make sense of the chronology… and so must we.

Shot in the narrow alleys, petite cafes and beautiful hanok inns of Seoul’s historic Jong-ro district, a favorite Hong location, Hill of Freedom is a masterful, alternately funny and haunting, tale of love and longing from the great director.

A portion of every ticket purchased goes directly towards supporting Orange County’s only nonprofit Art-house theater. Tickets for Hill of Freedom are $12!

I love the Frida, as an avid movie watcher, it’s great to have a place to go where many classic, cult and underrated films are shown. I had the pleasure of attending “The Decline of Western Civilization” screening with director Penelope Spheres doing a Q&A. Her films are so historically important and impacted me at a very young age. I am forever grateful for the experience, like nowhere else would this be possible. I think it’s truly amazing what the staff and everyone involved is doing for the … END_OF_DOCUMENT_TOKEN_TO_BE_REPLACED