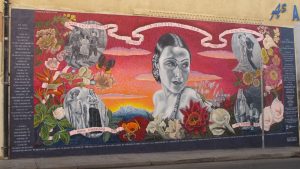 Hispanics and Latinos have been involved in American cinema since the silent era. However, many of the early Hispanic/Latino characters were predominantly negative Mexican stereotypes—violent male villains, sexual immoral women, and the dumb and/or drunk peasant. These images were seen as propaganda against all Hispanics/Latinos, prompting a massive backlash. Hispanic/Latino communities across America boycotted these films and their studios. Latin American governments abroad proposed boycotts. The issue became so heated that President Woodrow Wilson intervened, telling the Hollywood studio heads to “Please be a little kinder to the Mexicans.”

Darren Cassidy: Marlene Dietrich called Dolores del Río “the most beautiful woman who ever set foot in Hollywood.” Nonetheless, along with Greta Garbo, Mae West and Katherine Hepburn, del Río found herself added to the infamous “Box Office Poison” list. This and her breakup with Orson Welles figured large in her decision to return to her native Mexico and “stop being a star and become an actress.” Upon arrival, she met director Emilio “El Indio” Fernández. The pair made four highly successful and influential Spanish-language films together including Flor Silvestre and María Candelaria, the latter becoming not only the first Mexican film to be screened and to have won the Grand Prix in Cannes, but the first Latin American film ever to do so. Her staggering success during Mexican cinema’s Golden Age led to renewed interest from Hollywood.

Actually casting del Río, however, was impossible; too many of the the wrong people in the United States suspected her of being a Communist, in part because of her close association with artists Frida Kahlo and Diego Rivera. The later part of her career saw del Río branching out into production and theater. In 1957 she became the first woman to sit on the jury at Cannes and in 1966 she founded the Society for the Protection of the Artistic Treasures of Mexico. In 1978, she was finally recognized by President Jimmy Carter as a Cultural Ambassador of Mexico in the United States, and publicly acknowledged as one of the many victims of McCarthyism.

Justina Bonilla: Ricardo Montalbán was first discovered by MGM studios through his starring roles in Mexican films. He became famous as the handsome “Latin Lover” in the musicals and lighthearted comedies of Hollywood’s Golden Age. Wanting to show the full range of his acting abilities, Ricardo acted in dramatic roles in B-films and supporting roles (both American and Foreign), Broadway, radio, and television.  Through television he would establish his two most iconic roles—the mysterious Mr. Rourke on Fantasy Island and the villainous Khan Noonien Singh in the original Star Trek series.

Later, Montalbán would star in Star Trek II: The Wrath of Khan and become one of the most menacing villains in movie history. In 1970 he co-founded Nosotors, a non-profit organization for promoting positive Hispanic/Latino talent in the entertainment industry, both in front of and behind the camera. Ricardo Montalbán is beloved for his iconic roles and his determination to help uplift and reshape the images of Hispanic/Latinos in media.

Justina Bonilla: The multi-talented Sammy Davis, Jr. was a singer, musician, dancer, actor, producer, vaudevillian, and comedian who did spot-on celebrity impressions. In 1954, after years of touring with The Will Mastin Trio, he was featured on TV’s The Colgate Comedy Hour, establishing himself as a solo performer. A year later, in January of 1955, Sammy released his debut album, Starring Sammy Davis Jr., to success and praise. He then acted in a series of successful lead and supporting film roles, including Anna Lucasta, Porgy and Bess, Ocean’s 11, and Robin and the 7 Hoods. Davis became a member of the famous Las Vegas “Rat Pack” group (which included Frank Sinatra, Dean Martin, Joey Bishop, and Peter Lawford), who in the 1950’s where the epitome of cool and talent.

During his career, Sammy was politically and socially controversial for his open stance against segregation, his conversion to Judaism, and his marriage to May Britt, a white actress. After the era of the Rat Pack ended, Sammy continued to act, sing, and be politically active. Sammy Davis Jr. is known for so many things, but will always be loved as simply “Mister Show Business.”

LOVE this theater..OMG. I’ve been here several times now for different events. I’ve attended 2 of the 3 Scott Pilgrim events thrown by Cinemattack. I was even the lucky winner of the Scott Pilgrim album on vinyl. I don’t have a record player..but may as well be a trophy for me because I never win anything! lol. I also attended “The Last Unicorn” event with Peter S Beagle- the author speaking and answering a Q and A afterwards. This was so awesome. I have always loved loved this movie and it was … END_OF_DOCUMENT_TOKEN_TO_BE_REPLACED

I love the Frida, as an avid movie watcher, it’s great to have a place to go where many classic, cult and underrated films are shown. I had the pleasure of attending “The Decline of Western Civilization” screening with director Penelope Spheres doing a Q&A. Her films are so historically important and impacted me at a very young age. I am forever grateful for the experience, like nowhere else would this be possible. I think it’s truly amazing what the staff and everyone involved is doing for the … END_OF_DOCUMENT_TOKEN_TO_BE_REPLACED