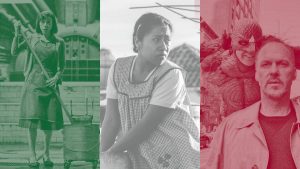 In 2013 history was made at The Academy Awards as Mexican director Alfonso Cuarón became the first Latin American to win the Oscar for Best Director. Since then, five out of the six wins for Best Director have been Mexican born directors—two wins each for Cuarón and Alejandro Gonzalez Iñárritu, and one for Guillermo Del Toro. This Mexican trinity of talent has created a strong ethnic presence in a major Oscar award category, with Best Cinematography also seeing a rise of winners and nominees from Latin America. The whole world is now seeing the wide range of talents Hispanics/Latinos have to offer. These three directors (AKA “three amigos”) represent a new wave of talent with more to come.

Atalia Lopez: An iconic and visionary director of contemporary horror and fantasy, Guillermo del Toro is an easy choice to make when thinking about essential figures in Mexican cinema. With his origins in the film industry coming from makeup and special effects (he studied under the legendary Dick Smith), Del Toro’s mastery of the macabre is matched only by his ability to instill humanity in the monsters he creates.

As a director, Del Toro’s œuvre reveals an obsession with monsters, ghosts, and supernatural beings, both sinister and misunderstood. In his directorial debut Cronos (1993), Del Toro incorporates a perspective that will become fruitful territory for him: children navigating and interacting with supernatural beings and creatures. His use of the Spanish Civil War in The Devil’s Backbone (El Espinazo del Diablo, 2001) and Pan’s Labyrinth (El Laberinto del Fauno, 2006) shows the interplay between children and the supernatural, all against the backdrop of broader historical battles against fascism.

His comic book adaptations Blade II (2002), Hellboy (2004), Hellboy II: The Golden Army (2008), and giant-monsters-vs-giant-robots blockbuster Pacific Rim (2013) put the director at the helm of big budget franchises. But it is The Shape of Water (2017), Del Toro’s most acclaimed and personal film, that brings together all of the hallmarks of the filmmaker’s style and sensibility, with an intentional celebration of old Hollywood (both its iconic monsters and its iconic love stories). Winning Best Director and Best Picture at the 2018 Academy Awards, The Shape of Water is a truly original piece of cinema, a film where dual love stories (between woman and monster, filmmaker and films) reveal that we cannot choose who we fall in love with any more than we can choose our true calling – for Del Toro, making films that reach beyond our understanding of what is monstrous is his calling.

Sammy Trujillo: In 2003, Mexican director Alfonso Cuarón stated he left Mexico “for artistic survival. If I had stayed, I would have been forced by the government, who control the movie business, to direct TV shows or commercials or infomercials for the government.” Cuarón’s frustrations with government censorship in Mexico arose from a lawsuit he filed over the government’s 18+ rating of his 2001 film Y Tu Mama Tambien. Facing adversity had become commonplace for Mexican filmmakers, who relied almost entirely on government funding to finance their projects. Before that, the government limited the distribution of his first film, Solo con Tu Pareja and blocked funding for other projects.

Born in Mexico City in 1961, one could see how skepticism of authoritarianism serves as a recurring theme in his films. When he was 9 years old, the government launched attacks on a student protest in Tlateco. When he was 10, the government recruited young men to slaughter a slew of protesters in the Corpus Christi massacre. The PRI (Institutional Revolutionary Party) controlled Mexico as a one-party state and would continue to do so until 2000. Despite this, none of Cuarón’s films have an overt political agenda. Instead, Cuarón examines the political turmoil of Mexico and finds beauty in the mundane. To an unfamiliar audience, Y Tu Mama Tambien is a simple road trip film, with only brief allusions to the PRI’s political collapse. Yet, the changing political landscape of Mexico surrounds even the most apolitical shots of the film.

After the critical and commercial success of the 2013 film Gravity, Cuarón turned down many offers to direct blockbuster films. Instead, he returned to Mexico to film the semi-autobiographical Roma. The film, in many ways, serves as an olive branch to repair the burned bridges with the Mexican government. As a love letter to his upbringing in Mexico, Roma spares no expenses when criticizing the government, including a jaw-dropping recreation of the Corpus Christi massacre. But the film’s real beauty lies in the long shots and deep focus of casual life in the suburbs of Mexico City. Accompanied by diegetic music, Roma‘s intimate portrait of Cuarón’s childhood reflects on his most important memories as a young boy, the abandonment of his father, the witnessing of a forest fire, and attending the films that shaped his cinematic vision. By framing these memories from the perspective of a poor, indigenous housemaid, Cuarón acknowledges the racial, classist, and gendered wounds hidden in Mexico that may not have been apparent to him in his upbringing.

The Mexican government also appears to be willing to mend fences with Cuarón, having made Roma their official selection for the Academy Award for Best Foreign Film. Perhaps the decision came from a recognition of Cuarón’s influence on Mexican cinema. After becoming the first Mexican director to win the Academy Award for Best Director for his 2013 film Gravity, Alfonso Cuarón launched a trend in which 5 of the past 6 Academy Awards were won by Mexican directors.

Trevor Dillon: Ever since his debut film in 2000, Alejandro González Iñárritu has cemented himself as one of Mexico’s finest filmmakers. The beginning of his career saw the trilogy of Amores Perros (2000), 21 Grams (2003), and Babel (2006). All are hard-hitting emotional feats that garnered Iñárritu great reviews and tons of acclaim. They all tell international stories about the human condition, mostly focusing on the misery of life.

Just when we thought his ambition couldn’t be topped, in the mid-2010s he released the extremely difficult one-two punch of Birdman or (The Unexpected Virtue of Ignorance) and The Revenant. For these Iñárritu won the Best Director Academy Award two years in a row, becoming the first to do so in over 60 years. Where he will go from here with his career is something film fans wait on bated breath for. How will Alejandro González Iñárritu close out this second magnificent trilogy?

LOVE this theater..OMG. I’ve been here several times now for different events. I’ve attended 2 of the 3 Scott Pilgrim events thrown by Cinemattack. I was even the lucky winner of the Scott Pilgrim album on vinyl. I don’t have a record player..but may as well be a trophy for me because I never win anything! lol. I also attended “The Last Unicorn” event with Peter S Beagle- the author speaking and answering a Q and A afterwards. This was so awesome. I have always loved loved this movie and it was … END_OF_DOCUMENT_TOKEN_TO_BE_REPLACED