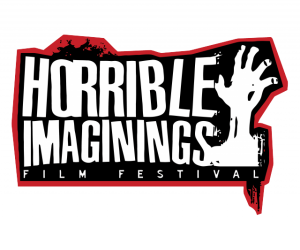 Not one to be thwarted by the latest plague upon humankind, the Horrible Imaginings Film Festival has taken to the web for its 11th year of programming– and it has not only survived 2020, but has thrived on more than a few fronts.

This “Streamin’ and Screamin’” edition of the eclectic genre festival was packed with more content than ever before, spanning not three days, but an entire week. With 100 shorts and 13 features, it was a blessing in disguise for many folks to be able to enjoy the festival on their own time, or as a co-watch with others.

Of course, the HIFF team went above and beyond to keep the event interactive and human. This aspect came through from the very first night, popping off live via Zoom with the cast and crew of the 2020 reimaging of The Brain That Wouldn’t Die— featuring a special appearance from the talking head herself! Immediately after the premier discussion panel was the live chat-along viewing of the 1962 original– and boy, did the chat have fun!

In not just a killer head-start, but a peek at what would be the norm throughout the live portions of the festival, the Brain co-watch became an impromptu pun competition, with chat members bantering back and forth with body part related word-play. The chat function during films and panels alike would play a huge role in emulating the HIFF experience, and allowing for humorous jabs and important discussions alike. Even technical hiccups were embraced, like the game of taking a drink every time someone was muted on Zoom, or the discussions during wait times about installments of the Scooby Doo franchise.

There was no shortage of seriousness however, with some film blocks tackling some of the greatest horrors of reality, either healing trauma through art or leaning into our greatest fears. Horrible Imaginings continues to foster a safe space for horror, promoting humanity and showcasing films from diverse voices, from young filmmakers under 17 to features on their way to wide release. Notable topics delved into this year included a perspective on American police culture that birthed Self Defense, the monster of meritocracy in Repossesed, and the voyeuristic violence against LGBTQ+ characters in film (Thorns).

The lack of physical attendance actually made things more intimate and flexible than it would be otherwise. With no room capacity or travel required, HIFF was able to host discussions with featured filmmakers from across the globe, regardless of time zone and location. With panelists representing works from Singapore, Israel, Columbia, and much more, it was an international affair like never before, even featuring creators as they were headed out on the road.

The daily “Frida Lobby” Zoom hangouts were the most unique feature of the virtual form of HIFF, wherein festival-goers and cast/crew came together for a couple hours to chat about anything and everything. In no other festival space would 20 people from all walks of life be able to participate in the same conversation, with talks around such riveting subjects as obscure horror anthology shows from the 80s and 90s, Twilight slash fiction, the history Baragon the kaiju, and hilarious film titles which feature colons, just to name a handful. There were even a few room tours and showing off of different collections, action figures, and pet cats, allowing folks to truly get to know each other on a level that isn’t possible in person.

It can’t be understated just how much of a community Horrible Imaginings has become over the years– it can be felt in every moment of this past week’s live segments, even to a newcomer like myself, with people being greeted and recognized by name in the chat by the moderators. There were a few tender moments that arose, comments conjuring a tear or two and reminding everyone you truly have no idea what folks have gone through. Moderators gave the audience a direct line to the panel, ensuring everyone’s comments and questions were heard, and all were welcome.

The last Frida Lobby meeting was a bittersweet one, with it hard to say goodbye– some folks stayed to chat far beyond the scheduled end time. Yet there is an entire day of programming left to enjoy (plenty to catch up on too), and there remains an air of promise after a festival well done. Though the future for many of us is uncertain for many of us in these unprecedented times, Horrible Imaginings responsibly leads by example, proving that the current horror show we call reality doesn’t have to mean the end of the festival, or of our connections. In fact, now may be one of the best times to think about our current concerns, which will surely be felt in cinema for years to come.
Though this year’s Horrible Imaginings Film Festival may be dead and gone, Horrible Imaginings follows Labor Day weekend with a bang! Collaborating with The Frida Cinema yet again for a presentation of Re-Animator, Horrible Imaginings will be making its Drive-In Dine-Out debut, Tuesday the 8th at Tustin’s Mess Hall. Tickets are still available, so if a full seven days wasn’t enough to sate you, grab one before they’re gone!

What a hidden gem! I had such a lovely time at a recent showing of Godzilla (1954). This theater is a bit timeworn, yet undeniably quaint and charming with an unconventional feel. And interestingly enough, the audience served as the sweet element of surprise. Those in attendance created an atmosphere of delight, comfort, and personal acceptance… and get this.. there was an actual host who presented a brief preface to the film just prior to viewing. Very collegiate, which I loved!  All in all pe… END_OF_DOCUMENT_TOKEN_TO_BE_REPLACED