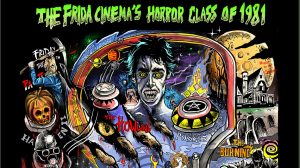 This Halloween season, we are excited to announce we will be programming The Frida Cinema’s Horror Class of 1981! Over the course of October, we will be screening ten horror films from 1981 to celebrate the 40th anniversary of these films’ release. Being that 1981 was one of the more notable years for horror films, with slashers, werewolves, demons, and ghosts populating much of the theaters, we hope to revisit some of these canonical pieces with our local community.

After failing to kill stubborn survivor Laurie (Jamie Lee Curtis) and taking a bullet or six from former psychiatrist Dr. Sam Loomis (Donald Pleasence), Michael Myers (Dick Warlock) has followed Laurie to the Haddonfield Memorial Hospital, where she’s been admitted for Myers’ attempt on her life. The institution proves to be particularly suited to serial killers, however, as Myers cuts, stabs, and slashes his way through hospital staff to reach his favorite victim.

This film will be screened in partnership with Nostalgic Nebula.

Friday the 13th
Directed by Steve Miner | 1981
The second entry in the long-running horror series focuses on a group of teenage would-be counselors converging on Camp Crystal Lake for training under the tutelage of head counselor Paul (John Furey). Inevitably, Paul relates the story of Jason Voorhees (Warrington Gillette), a boy who ostensibly drowned at the camp and whose mother murdered a group of counselors in revenge. No one takes the tale seriously until a very much alive Jason begins gruesomely eliminating people.

This film will be screened in partnership with Nostalgic Nebula.

The Beyond –  October 7th – October 9th
Directed by Lucio Fulci | 1981
A young woman inherits an old hotel only to find it sits atop a gateway to Hell and all manner of creatures lurk in the darkness.

This film will be screened in partnership with the Horrible Imaginings Film Festival (HIFF).

The Burning + Madman (Double Feature) – October 12th – October 14th
The Burning
Directed by Tony Maylam | 1981
At summer camp, some teenagers pull a prank on the camp’s caretaker, Cropsy (Lou David). But the joke goes terribly wrong, and the teens leave Cropsy for dead after setting him on fire. But no one keeps Cropsy down. A few years later, the burned and disfigured caretaker returns to camp equipped with his trusty shears, ready to unleash his particular brand of vengeance on a whole new group of teens. The murderous Cropsy stalks the campers in the woods, one by one.

Possession 4K Restoration – October 15th – October 21st
Directed by Andrzej Żuławski | 1981
After Anna (Isabelle Adjani) reveals to her husband, Mark (Sam Neill), that she is having an affair, she leaves him and their son. Mark is devastated and seeks out Heinrich (Heinz Bennent), the man who cuckolded him, only to receive a beating. After a series of violent confrontations between Mark and Anna, Mark hires a private investigator to follow her. Anna descends into madness, and it’s soon clear that she is hiding a much bigger secret — one that is both inexplicable and shocking.

My Bloody Valentine – October 17th – October 19th
Directed by George Mihalka | 1981
A decades-old folk tale surrounding a deranged murderer killing those who celebrate Valentine’s Day turns out to be true to legend when a group defies the killer’s order and people start turning up dead.

The Howling 4K Restoration (Full Moon Screening) – October 20th
Directed by Joe Dante | 1981
In Los Angeles, television journalist Karen White (Dee Wallace) is traumatized in the course of aiding the police in their arrest of a serial murderer. Her doctor recommends that she attend an isolated psychiatric retreat led by Dr. George Waggner (Patrick Macnee). But while Karen is undergoing therapy, her colleague Chris (Dennis Dugan), investigates the bizarre circumstances surrounding her shock. When his work leads him to suspect the supernatural, he begins to fear for Karen’s life.

This film will be screened during a full moon!

The House By the Cemetery – October 25th – October 26th
Directed by Lucio Fulci | 1981
A New England home is terrorized by a series of murders, unbeknownst to the guests that a gruesome secret is hiding in the basement.

This film will be screened in partnership with the Horrible Imaginings Film Festival (HIFF).

An American Werewolf in London – October 27th – October 28th
Directed by John Landis | 1981
David (David Naughton) and Jack (Griffin Dunne), two American college students, are backpacking through Britain when a large wolf attacks them. David survives with a bite, but Jack is brutally killed. As David heals in the hospital, he’s plagued by violent nightmares of his mutilated friend, who warns David that he is becoming a werewolf. When David discovers the horrible truth, he contemplates committing suicide before the next full moon causes him to transform from man to murderous beast. 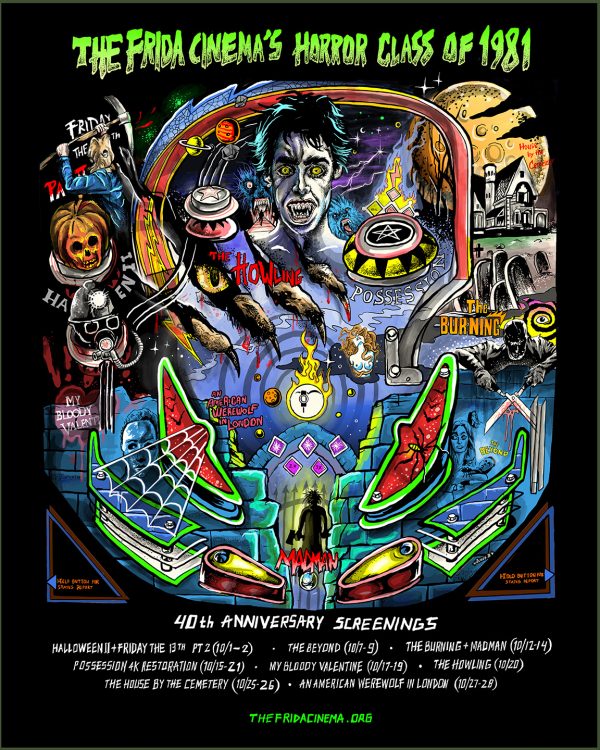 I love the Frida, as an avid movie watcher, it’s great to have a place to go where many classic, cult and underrated films are shown. I had the pleasure of attending “The Decline of Western Civilization” screening with director Penelope Spheres doing a Q&A. Her films are so historically important and impacted me at a very young age. I am forever grateful for the experience, like nowhere else would this be possible. I think it’s truly amazing what the staff and everyone involved is doing for the … END_OF_DOCUMENT_TOKEN_TO_BE_REPLACED

LOVE this theater..OMG. I’ve been here several times now for different events. I’ve attended 2 of the 3 Scott Pilgrim events thrown by Cinemattack. I was even the lucky winner of the Scott Pilgrim album on vinyl. I don’t have a record player..but may as well be a trophy for me because I never win anything! lol. I also attended “The Last Unicorn” event with Peter S Beagle- the author speaking and answering a Q and A afterwards. This was so awesome. I have always loved loved this movie and it was … END_OF_DOCUMENT_TOKEN_TO_BE_REPLACED