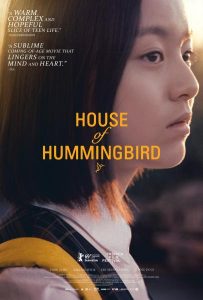 Positioned against the backdrop of a rapidly expanding Seoul in 1994, a lonely 14-year-old Eun-hee moves through life like a hummingbird searching for a taste of sweetness wherever she may find it. Deprived of attention from her family, she roams the neighborhood with her best friend, attempts romantic relationships with both girls and boys alike and is sent to the hospital with an unclear diagnosis. When new teacher Young-ji arrives, she becomes the first adult Eun-hee feels really understands her.

Along with 3 awards at the 2019 Tribeca Film Festival, the movie earned Grand Prix for Best Feature Film (Generation 14+ category) at Berlinale and the Audience Award at The Busan International Film Festival.

Link to purchase tickets to stream this film in our Virtual Cinema will be available from Friday, June 26th (Thursday at Midnight) until Thursday, July 9th. To purchase and stream, click the ‘Stream Now’ button!

“It lands on a poignant aftertaste through Kim’s serene attentiveness to the rhythms and details of everyday life…” — Tomris Laffly, Variety

What a hidden gem! I had such a lovely time at a recent showing of Godzilla (1954). This theater is a bit timeworn, yet undeniably quaint and charming with an unconventional feel. And interestingly enough, the audience served as the sweet element of surprise. Those in attendance created an atmosphere of delight, comfort, and personal acceptance… and get this.. there was an actual host who presented a brief preface to the film just prior to viewing. Very collegiate, which I loved!  All in all pe… END_OF_DOCUMENT_TOKEN_TO_BE_REPLACED

LOVE this theater..OMG. I’ve been here several times now for different events. I’ve attended 2 of the 3 Scott Pilgrim events thrown by Cinemattack. I was even the lucky winner of the Scott Pilgrim album on vinyl. I don’t have a record player..but may as well be a trophy for me because I never win anything! lol. I also attended “The Last Unicorn” event with Peter S Beagle- the author speaking and answering a Q and A afterwards. This was so awesome. I have always loved loved this movie and it was … END_OF_DOCUMENT_TOKEN_TO_BE_REPLACED