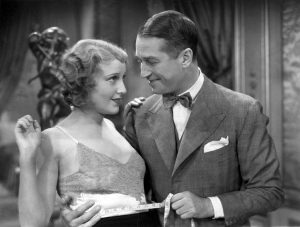 Before major Hollywood studios began self-censoring in 1934 under the Motion Picture Production Code, it wasn’t uncommon for films to contain and address all kinds of risqué or controversial subject matter, including, but not limited to, profanity, nudity/sexuality, and criticism of established order. It was the Production Code that declared such subjects taboo.

The Production Code is also colloquially known as the “Hays Code,” after Will H. Hays, who was president of the Motion Picture Association of America from 1922 to 1945 and who was responsible for stricter enforcement of the Production Code. In 1927, at Hays’ urging, studio executives collaborated to develop a list of “Don’ts and Be Carefuls.” This list banned such subject matter as profanity, suggestive nudity, interracial relationships, and scenes of childbirth. Filmmakers were still allowed to portray sympathy for criminals, sedition, and men and women in bed together, among other things, so long as it was done with “good taste.”

Studios opted to take on self-censorship in the face of public pressure due to the multiple Hollywood scandals in the 1920s, which included producer William Desmond Taylor’s murder. There was also the lingering reputation of the movie industry as morally questionable.

Though many major studios adopted the Production Code in 1929, strict enforcement didn’t pick up in earnest until roughly 1934, which meant films regularly slipped through the cracks. Many of these Pre-Code films are remembered today for their boldness. If you find yourself in need of some lighthearted amusement, here are some Pre-Code films you can check out.

This 1932 musical comedy by Rouben Mamoulian stars Maurice Chevalier as Parisian tailor Maurice Courtelin and Jeanette MacDonald as the recently widowed Princess Jeanette. When Courtelin becomes frustrated with one of his clients, Vicomte Gilbert (Charles Ruggles), and his ever-growing pile of unpaid tailoring bills, he decides to confront Gilbert at his family estate.

Meanwhile, Gilbert’s cousin Jeanette has been suffering from fainting spells, which the family doctor believes they can cure by “getting her married to a healthy young man of suitable rank.” Enter “Baron” Courtelin, who falls in love with Jeanette at first sight and is of conveniently high birth, though he’s strangely opinionated about clothing alterations.

As director Billy Wilder described it, “the Lubitsch touch” was subtly suggestive, a combination of charm and comedy. Trouble in Paradise tracks the romance between gentleman thief Gaston Monescu (Herbert Marshall) and lady pickpocket Lily (Miriam Hopkins), whose sly flirtations are a whirl of thievery and false identities.

They decide to combine their talents and head to Paris, where they plan to play the long game on perfume executive Mariette Colet (Kay Francis) and her vast fortune. Gaston finesses himself a position as her personal secretary and gets Lily a job in Mariette’s offices. Trouble brews when Gaston finds Mariette to be disarmingly charming. Lily grows impatient for their score, and Gaston’s honor as a thief is at stake.

This is not your average classical Hollywood musical, even if Busby Berkeley did contribute his distinctive kaleidoscopic choreography to the musical numbers. Gold Diggers is more socially conscious than one would expect, taking place, and releasing during the Great Depression.

Though ostensibly a romantic comedy, it is clear that LeRoy had no intention of allowing his audiences to slip into an easy denial of the reality just outside the movie theater doors. The film concerns a group of actresses who are desperate for paying work: ingenue Polly (Ruby Keeler), torch singer Carol (Joan Blondell), and comedian Trixie (Aline MacMahon). Ruby’s boyfriend, Brad Roberts (Dick Powell), offers to compose the music and put up the cash to produce a new show.

The women become suspicious of where the money came from and discover that not only is Brad the son of a millionaire, his older brother, J. Lawrence Bradford (Warren William), refuses to tolerate his association with a bunch of “gold diggers.” What follows is half a coverup for Brad and Polly’s relationship and half a bid for some lucrative revenge on Carol and Trixie’s behalf.

Adapted from a short story by Samuel Hopkins Adams, It Happened One Night is a screwball comedy about the misadventures of spoiled heiress Ellen “Ellie” Andrews (Claudette Colbert) and out-of-work journalist Peter Warne (Clark Gable).

News gets out that Alexander Andrews (Walter Connolly) is offering a cash reward for the return of his daughter, who has eloped with a fortune-hunting pilot. Ellie catches a Greyhound bus on her way to reunite with her new husband and runs into Peter, who recognizes her and issues an ultimatum: grant him an exclusive on her story in exchange for a personal escort to her husband or be handed over to her father. Ellie accepts the first choice, and they set off. Their journey sees them running into mishap after mishap, tumbling swiftly into infatuation in the meantime.

Gilda Farrell (Miriam Hopkins) is a commercial artist who has the bad fortune to be a muse, critic, and lover to two men at the same time: unsuccessful painter George Curtis (Gary Cooper) and his friend/roommate, unproduced playwright Tom Chambers (Fredric March).

She has no taste for the conventional life, and her unflinching criticism might actually push George and Tom toward real success. However, tensions between George and Tom continue to build. Gilda’s solution? A sharp transition to a purely platonic relationship, in which Gilda will move in with them and be their “mother of the arts.”

Though a loose adaptation of the Noel Coward play of the same name, Design for Living is a ride that flouts conventional relationship structures in ways only Ernst Lubitsch can accomplish.

The breadth of Pre-Code films is much more than the comedic, lighthearted ones I’ve suggested so far. If you’re not particularly interested in those, or if you’ve already seen them, here are five more.

One Way Passage (dir. Tay Garnett, 1932) – William Powell and Kay Francis star as an escaped convict and a terminally ill woman who fall in love, regardless of their respective death sentences.

Baby Face (dir. Alfred E. Green, 1933) – In one of the most notorious films of the Pre-Code era, Barbara Stanwyck stars as a young woman who uses the only resource she has at her disposal to get ahead in life: her sex appeal.

Footlight Parade (dir. Lloyd Bacon, 1933) – Before he was known for his gangster roles, James Cagney made his start in vaudeville, and there’s nowhere better to see Cagney the song-and-dance man than as neurotic director Chester Kent.

The Thin Man (dir. W.S. Van Dyke, 1934) – William Powell and Myrna Loy star as retired detective Nick Charles and his wife Nora, who launch an investigation into the disappearance of one of Nick’s former clients—day-and-night drinking all the while.

I love the Frida, as an avid movie watcher, it’s great to have a place to go where many classic, cult and underrated films are shown. I had the pleasure of attending “The Decline of Western Civilization” screening with director Penelope Spheres doing a Q&A. Her films are so historically important and impacted me at a very young age. I am forever grateful for the experience, like nowhere else would this be possible. I think it’s truly amazing what the staff and everyone involved is doing for the … END_OF_DOCUMENT_TOKEN_TO_BE_REPLACED