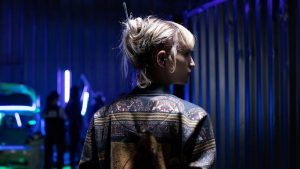 I’m not sure what to make of Titane since I feel my response is more emotional than analytical. It’s hard to describe exactly what I saw and how I interpreted it since I went in blind and only took it at face value: that is, as a serial killer movie in a similar vein to Psycho but—from what I could tell—the gender roles switched. What I discovered however, was something far more rooted in gender fluidity and how one wants to be identified and treated by others regardless of what gender they choose to identify as and how they wish to be interacted with. It’s something I wish I understood more going into this film knowing friends who deal with the continued barrage of those who are comfortable with their gender questioning how they feel about identifying as either gender.

The comfort levels that others push upon Alexia—the genderfluid serial killer with a metal fetish who gives Tetsuo the Ironman a run for his money—is always tested by the men and women they (to reflect Alexia’s ambiguous gender, this article will address them by singular “they” pronouns) interact with. They wish not to be treated as the kind of sexual object used to satisfy the traditional gender roles associated with being a sexually active male or female. The constant push to be a sexually active human is tested by Alexia’s minimal interest in truly engaging in a relationship with men or women. It’s something they push upon themselves in order to satisfy the wants and needs of others around them who want them to play male or female. This ties into the theme of not being able to be yourself in order to make others happy and plays into Alexia’s need to manipulate others in order to survive after their killing spree. Alexia goes from trying their best to be the sex object of men and women’s dreams at the car show they work at to pretending to be the long lost son of grieving fireman Vincent who, from the start of finding Alexia at a police station just a few hours from his station, is sure that his long-lost son has resurfaced after being abducted years ago. The struggle and push that Alexia feels from trying play the part of Vincent’s son shows they still wish to feel comfortable in their body and be able to choose their identity.

It’s not long before the lines are blurred further as we see Vincent dealing with the young men in his unit flowing between playing with gender expectations and, at times, being unwilling and uncomfortable with Alexia’s own expressions of their gender fluidity and identity. Rayane, the son of Vincent’s sergeant, goes from unflinching acceptance of Alexia being Vincent’s long-lost son to soon realizing that Alexia has adopted a masculine-presenting gender identity to hide from the police. While the film explores Alexia’s struggle with their gender identity, they also have to deal with their soon-to-be-born child of unknown human or machine identity. Alexia’s love for cars goes beyond just a fascination with speed, spiraling into a new form of sexual fetishism that shows them being for more comfortable with the company of a low rider with leopard print seat covers than the comfort of another human being. They have to come to terms with the one thing that one of the genders they choose to identify has to deal with more often than not: the unwanted birth of a child that may stem from rape or a one night stand. Alexia tries their best to hide this and deal with it in many unfortunate manners that women sometimes are forced to do when not given the chance to have affordable abortions or the ability to give their unwanted children to couples wishing to have children of their own. 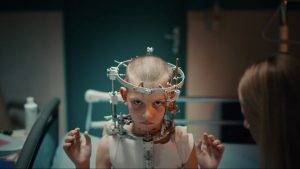 The opportunity that arises from the grieving Vincent’s vulnerability and Alexia’s desperation for a safe place to hide out and give birth to their unwanted child gives the movie its strangest plot point of the movie as well as an ending worth holding out for. It’s foreshadowed by the return of Vincent’s wife, who uncovers Alexia’s secret leading to her telling Alexia to make Vincent happy no matter what. This leads to an ending very much in tune with what I believe is Julia’s biggest influence, the films of David Cronenberg. The ending doesn’t really go the way of, say, Crash or The Fly, but it makes you wonder how deep one’s connection with their inner two halves trying to coexist with each other is. The image of a metallic child being held by a man whose wish of having another child to take care of has been fulfilled is touching, to say nothing of the knowledge that Alexia finally found someone who didn’t run away when they were still trying to figure out their own identity and loved them for who they were and not what they could be to others.

All in all, Ducournau picks up the torch of body horror from Cronenberg and runs with it. Titane fulfills the promise of what we fear the most as human beings: having something unknown growing inside you as you’re trying to figure out who you are. To me, it is the best metaphor of what many have to deal with when they begin to understand that they don’t have to identify as what others perceive them gender-wise, demonstrating that we can all be comfortable within our own gender while still connecting to our feminine and our masculine sides. The movie may feel confusing at first, but I think with multiple viewings many can take comfort in knowing that, if you been through an experience similar to what Alexia has been through, you can understand and hope that those who may not understand can relate somehow to the struggles many face just trying to be comfortable in their mind, body, and soul. 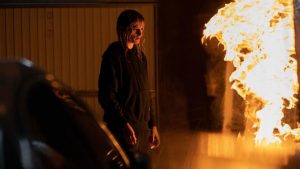