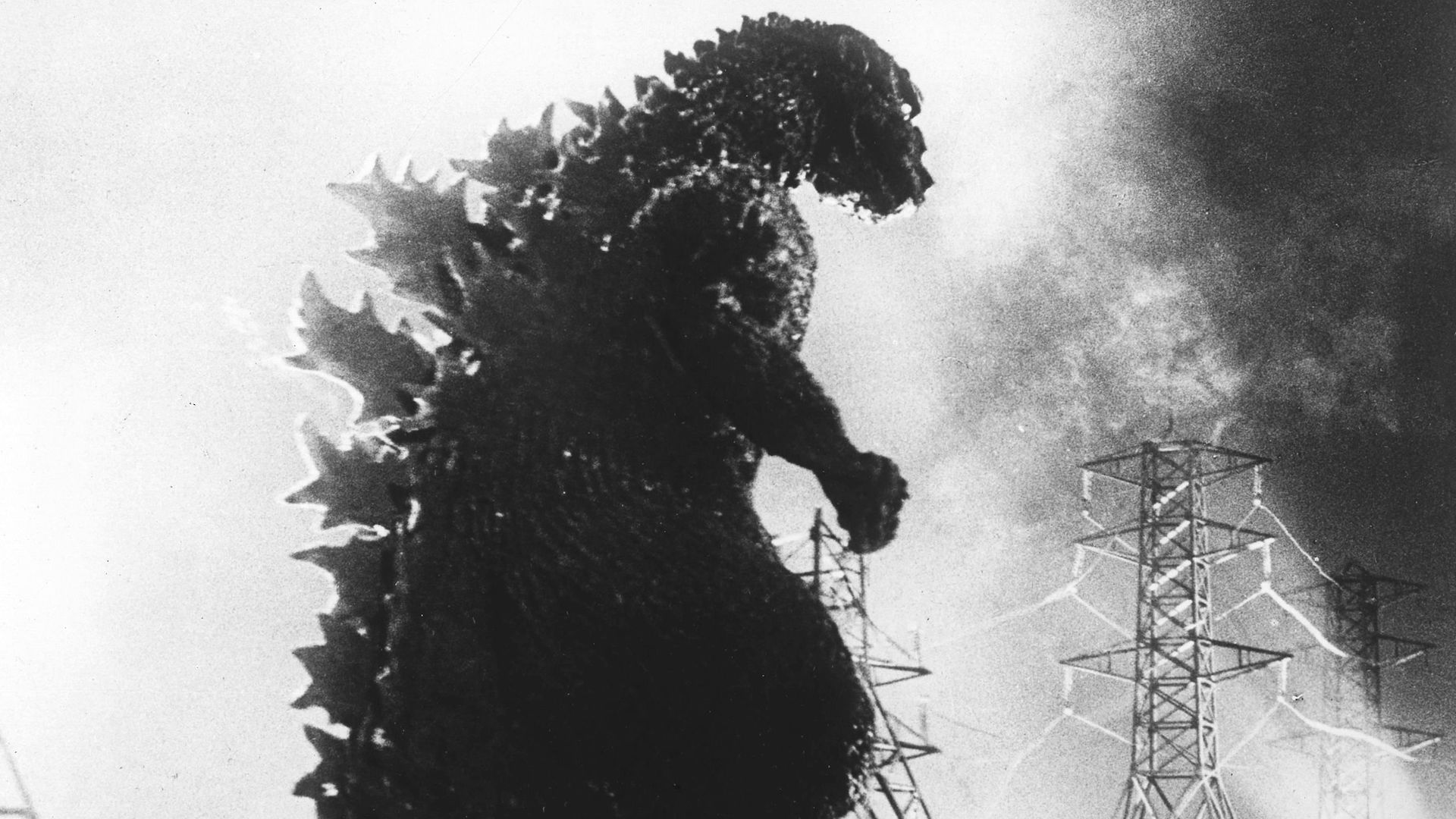 Volunteer of the Month Max Ney on Gojira

June is just a week away and it’s set to be one for the books! We’ve got not one, not two, but three awesome series coming your way next month! We begin with Pride Month programming, a five-film celebration of LGBTQ identity and culture that opens with returning Frida favorite The Adventures of Priscilla, Queen of the Desert. Then The Cinematic Experience, highlighting groundbreaking movies that changed the way viewers look at film itself, kicks into gear with The Tree of Life, Terrence Malick’s experimental coming-of-age drama! Capping it all off is Arthouse 101, a recurring series of – you guessed it – arthouse films from around the world that starts with Akira Kurosawa’s Rashomon. By remarkable coincidence, we’ve got another classic Japanese film from the 50s playing this month: Ishiro Honda’s one and only Gojira.

Nearly 10 years after Japan’s defeat in World War II, the country is shocked by a series of mysterious attacks on ships off its coast. Determined to get to the bottom of the matter, the government investigates only to learn that a 50-foot dinosaur – reawakened and mutated by nuclear testing in the Pacific – is responsible. Dubbing the beast “Godzilla”, the military scrambles tanks, jets, and destroyers to stop this unprecedented threat but the creature is undeterred, and it falls to the scientist Dr. Serizawa to make a critical decision: to deploy the terrible new weapon he created against Godzilla (and potentially trigger a new arms race) or keep it a secret and allow the monster’s rampage to continue. The first in an internationally-successful franchise that now includes 32 movies (some of which I discussed in a previous post) and inspired directors as diverse as Tim Burton, Nobuhiko Obayashi, and Martin Scorsese, Gojira is the somber, politically-charged original that started it all.

While Gojira has played at The Frida before, we owe the pleasure of getting to see it once again to Max Ney, our June Volunteer of the Month! Another post-pandemic newcomer to the Frida team, Max started working behind the counter Friday nights after school and has remained there ever since. Friendly, attentive, good-spirited: these are all words that come to mind when I think of my interactions with him, including (but hardly limited to) my interview with him about his VOTM pick. Already stoked as it is by him picking Gojira, I was pleasantly surprised to learn that the next movie he’d love to program here is also another of my favorites and, with any luck, we’ll get to watch it here as Max’s next volunteer pick of the month!

I go to OCHSA, which is like a 10 to 15 minute walk from here. I’ve been going there since 7th grade – so for like 4 years now – and I just started walking over here after school. My dad teaches film history, so we both really appreciated having a theater down the street that we could go to. I think the first movie I saw here was Top Gun, which was really fun, and we kept on just seeing more and more stuff and walking on down to The Frida after school eventually became a thing I did every week. Basically, as long as I’ve been going to OCHSA, I’ve been going here.

When The Frida opened back up after quarantine, I thought, “Wow, I really love this place. I’m down here all the time, I have a lot of free time, it’s summer and I don’t have a lot of plans,” and I said, “Why not work here? It’s a great place, and I don’t see why not.” And so, I’m here!

Tell us a little bit about Gojira.

Gojira is probably my favorite monster movie. I think a big reason for that is the way it portrays Godzilla: he’s the type of monster who’s not bad necessarily. His actions are pretty justified, and as I learned more about the symbolism as I grew up, I found myself really interested by this facet on the character. I also really like this original version because – while the sequels like Mothra vs. Godzilla are good – there’s just something more raw and special about this one, particularly with it not being dubbed or anything. There was a while back where I found the Criterion Collection of all the Godzilla movies and it was just like a road trip: I started watching all of them and I found this original one to be my favorite. It just kind of stuck with me, so I decided, “Hey, this would be fun!” If I can get friends out to this movie, that would be awesome as well, and that’s kinda why I picked this.

Oh man, that’s hard! I’m going to say seeing Eraserhead here. Just the absurdity, the pure absurdity of that movie, not to mention it being the second or third movie I saw here. I was like 11 or 12 when I first saw that movie and the only real experience I had with David Lynch before that was Twin Peaks (my brother would watch it sometimes and I would see it in the background). My first time watching it I was like, “This is so weird”, but I love it! I also met Hal Landon Jr., the pencil guy – I did a play with him, so I knew him beforehand – so suddenly seeing him on the Frida screen was just like, “Oh my God!” It was weird, but it was also the moment where I went to myself, “I love this place.”

A big one that I would like to do is A Ghost Story, with Casey Affleck. As a kid, I always watched movies and loved them but that was one of the first movies I watched when I was older and could really articulate my thoughts and feelings about. I really love that movie and to see it on the big screen with the sound and everything going on would be great.