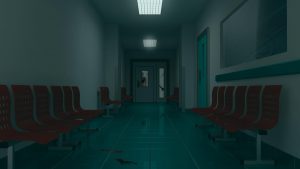 This era of stay-in-shelter and being physically isolated from those we love is leading many to watch films about isolation. While some might find this trend odd, it’s quite common for films, especially horror, to have themes reflecting the fear of the time, such as the 1950’s and the fear of aliens/the others (Invasion of the Body Snatchers comes to mind). Outside of horror, it’s fascinating how many different film genres evaluate isolation, including mystery, fantasy, teen flicks, and sci-fi.

For this 3-part blog series, we’ll be examining films which fall under three main themes of isolation: isolated in creepy places, isolated in the outside world, and isolated with yourself or others. Part one will look at locations that are commonly used for isolation themed films, eerie places which add to the of fear and tension of isolation, even if isolated with others. Enjoy!

Isolated in a Remote Cabin:

The movie that launched the zombie genre as we know it today. An array of survivors of a zombie uprising flee to a remote cabin for shelter only to spend the night fighting the zombies and dealing with tensions among themselves for survival. Over the years, this cult film has grown into an essential of America cinematic history as well as a strong commentary of racial tension of the 1960’s.

This modern cult classic is an homage to the Evil Dead series and inspired by director Eli Roth’s experience with a severe skin infection. A group of friends rent a cabin in the woods for a fun time only to face mounting paranoia and fear as an invisible and contagious flesh-eating disease slowly devours each of them.  The fear of the unknown seen with the friends mimics the fear many had with the post-9/11 anthrax scare and potential biowarfare through the contamination of local or national water supplies.

Isolated in a Remote House:

A pre-code spooky yet comedic horror delight, featuring one of the godfather’s of 20th century horror: Boris Karloff. Caught in a dreadful thunderstorm in the isolated Welsh countryside, travelers take refuge in an eerie home of a bizarre family who are hiding a deadly secret. Though this film was considered “lost” for many years, its rediscovery has created a renewed appreciation for this pioneering gothic horror film.

An Oscar winning horror film which greatly impacted modern American cinema, commenting on the painful contemporary issues of racism. Chris, a black man, goes with Rose, his white girlfriend, to her family’s country home to meet them and eventually he is taken down a whirlpool beyond his greatest fears. A blood-chilling commentary of social and racial issues in contemporary America.

Isolated in a Mansion:

A breathtaking supernatural and psychological thriller which makes you feel as though the walls are closing in on you. Four adults isolate themselves at Hill House to prove if this notorious mansion is haunted, with their discovery being more than they can handle. The simplicity of this film proves how a minimalist approach can be hauntingly bone chilling.

Director Guillermo Del Toro pays a loving tribute to the Technicolor films of Mario Bava and gothic films in his ghostly love story. In 1901, a young aspiring female author hastily marries a handsome stranger and is taken to his family mansion filled with ghost desperate to get to her. After seeing this film, legendary horror author Stephen King described this film as “Gorgeous and just f**king terrifying”.

Isolated in Small Village or Town:

Considered by many as “The Citizen Kane of horror films”, this is one of the three British films responsible for the birth of the folk horror genre in the late 1960’s/early 1970’s. A Scotland Yard officer is sent to an isolated Scottish island to find a missing girl, stumbling upon the islander’s deadly intentions. The experimental soundtrack is one of the simplest, yet creepy accompaniments to a horror film.

Based on the novel of the same name, this horror film takes a satirical, yet in-depth analysis of the issues surrounding unrealistic gender role idealism and spousal control. Joanna and her family (husband and children) move to the perfect town of Stepford, where the odd behavior of all the town’s wives lead Joanna down a rabbit hole she cannot escape. Over the years, this 1970’s cult classic has become ingrained in mainstream culture, including being cited as a major influence in the story of Get Out.

Isolated in a Haunted House:

Among William Castle’s array of horror cult classics, House on Haunted Hill, is one of his most beloved films and first collaboration with Vincent Price. An eccentric millionaire (Vincent Price) and his wife are hosting a morbid party with fives strangers, offering each of them $10,000 if they live through the night in a rented haunted house. Castle’s use of gimmicks to promote this film gave him the nickname “The King of Gimmicks”.

Unlike other haunted house films whose evil comes from an external entity, this film focuses on the house itself as the center cause of evil. A family rents a beautiful Victorian summer home unknowing that it is eager to drain them of their energy, slowly taking over them. Featuring a stellar cast, including Hollywood heavy weights Bettie Davis and Oliver Reed, and directed by one of the top directors of TV Horror (Dark Shadows) and miniseries (Winds of War), Dan Curtis.

Isolated in a Castle:

The second and most financially successful of Roger Corman’s Edgar Allen Poe’s 1960’s film series. Traveling to Spain to investigate the strange circumstances of his sister Elizabeth’s death, Francis witnesses his widowed brother-in-law descend into madness over her death and the trauma of his father’s taste for torture. Two icons of horror cinema, Vincent Price and Barbra Steele, give gripping performances elevating the film’s gothic boldness.

Among the many film adaptations of Beauty and the Beast, this is a stunning but little-known Czechoslovakian gothic horror interpretation by one of the pioneers of Czech horror, Juaraj Herz. Julie takes her father’s place as a monster’s prisoner in his castle only to have the monster fall in love with her and reconsiders his hold over her. Herz’s remarkably elegant yet dark film is a novel cinematic dreamlike state.

What a hidden gem! I had such a lovely time at a recent showing of Godzilla (1954). This theater is a bit timeworn, yet undeniably quaint and charming with an unconventional feel. And interestingly enough, the audience served as the sweet element of surprise. Those in attendance created an atmosphere of delight, comfort, and personal acceptance… and get this.. there was an actual host who presented a brief preface to the film just prior to viewing. Very collegiate, which I loved!  All in all pe… END_OF_DOCUMENT_TOKEN_TO_BE_REPLACED