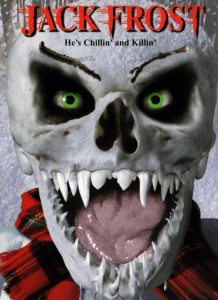 On his way to be executed, the vehicle containing notorious serial killer Jack Frost collides with a chemical truck, turning Jack into a snow-covered mutant and unleashing him on the unsuspecting town of Snomonton, “The Snowman Capitol of the Midwest”.

Jack immediately uses his blizzardy abilities to seek revenge on the bungling Sheriff (Christopher Allport, TO LIVE AND DIE IN L.A.) who accidentally ended his cross-country killing spree. Can the residents of Snomonton fight back against the psychopath snowman from Hell, or will they all end up in a snow-covered grave?

I love the Frida, as an avid movie watcher, it’s great to have a place to go where many classic, cult and underrated films are shown. I had the pleasure of attending “The Decline of Western Civilization” screening with director Penelope Spheres doing a Q&A. Her films are so historically important and impacted me at a very young age. I am forever grateful for the experience, like nowhere else would this be possible. I think it’s truly amazing what the staff and everyone involved is doing for the community. They bring the magic of the silver screen without charging you an arm & a leg to attend their special events/screenings. I highly encourage any film lover to check out the Frida, no matter what film you choose, you will not be disappointed! They have an awesome online presence as well (IG, Website) where you can ask any them any questions or view their monthly calendar. They also host local art shows, film festivals showcasing new artists and film-makers. … END_OF_DOCUMENT_TOKEN_TO_BE_REPLACED