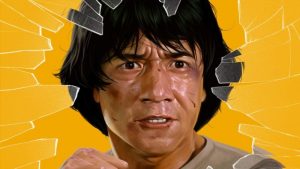 Most people don’t think a lot about Jackie Chan, star of our upcoming Police Story + Police Story 2 double-feature. If you mention him to someone, they’d probably remember him alongside Chris Tucker, or maybe Jaden Smith. They might remember an unassuming, polite old man on a talk show or a familiar voice from an animated movie. They might think of him as a novel vestige of the past, who faded out of obscurity and will soon pass back into it… but that would be a mistake.

In the 1970s, martial arts movies were just a curious import from Asia, presented with bad overdubbing in obscure theaters and full of stilted fighting and male posturing. It was in this milieu that Jackie Chan first gained recognition as a man who could do any stunt — including an ill-advised appearance in an adult film. Chan, despite a lack of commercial success, didn’t quit; after a brief hiatus, he returned to Hong Kong with a new style inspired more by Buster Keaton than Bruce Lee. This new slapstick style, with its dangerous and frenetic stunt work — motivated by perfectionism and a lack of budget — made Chan a star in Asia with a string of hits in the 1970s, cut the path toward his eventual worldwide recognition, and revolutionized martial arts cinema.

Before Chan, a martial arts movie featured lots of tense zooming close up shots, followed by a few fast punches and kicks before returning to slow posturing. By contrast, watching a fight scene from a Jackie Chan movie is mesmerizing; the moves come in an overwhelming flurry; every punch and kick is delivered with equal measures of ferocity, character, and comedy. When you see him swaying around fists in Drunken Master, or hanging by an umbrella (without any safety net or harness) from a speeding bus in Police Story, it gets the heart pumping like no other action scenes can because you know what you’re seeing is real. Every Jackie Chan movie crackles with the excitement and danger of a speeding roller coaster about to jump off the track. Along with his remarkable stunt team, Jackie Chan elevated action-comedy to an art form.

His greatest strength might just be the tenacity that led him to do a take over and over until he gets it right (snagging him the record for the most takes ever for a single scene). After all, it’s this tenacity that is responsible for his eventual break into the American market after a string of failed attempts in the 80s. When Rumble in the Bronx finally broke through in 1995, it was such a surprise hit that his previous movies like Operation Condor, First Strike, and Supercop were retrofitted for an American release. You can practically see the impact crater of Rumble in the Bronx in the decline of the traditional “one-liner” action star and the rise of an appetite for Chan’s style of kinetic, jaw dropping action that paved the way for fare like Crouching Tiger, Hidden Dragon, The Matrix, and the Bourne series. Even the Marvel Cinematic Universe owes tribute to the man who refused to give up.

Because giving up is something that Jackie never did. Not when it took hundreds of takes to get a shot right, not when he was rejected by Hollywood over and over, not when failed stunts shattered bone after bone (including his skull). Much like the characters he portrays that are made charming by their perpetual underdog status, Chan started at the bottom and fought his way to the top. With over 80 starring roles (and almost as many broken bones), another 11 in some form of production, a surprising music career with a dozen albums, and a multi-million dollar merchandising industry, Jackie Chan is more than just another movie star. He is the man for whom the phrase “performs their own stunts” was invented. He is a one-of-a-kind action star, perhaps the last great true action star with the proliferation of CGI. He is the cornerstone onto which contemporary action cinema is built. You would be wise to remember Jackie Chan.

LOVE this theater..OMG. I’ve been here several times now for different events. I’ve attended 2 of the 3 Scott Pilgrim events thrown by Cinemattack. I was even the lucky winner of the Scott Pilgrim album on vinyl. I don’t have a record player..but may as well be a trophy for me because I never win anything! lol. I also attended “The Last Unicorn” event with Peter S Beagle- the author speaking and answering a Q and A afterwards. This was so awesome. I have always loved loved this movie and it was … END_OF_DOCUMENT_TOKEN_TO_BE_REPLACED

I love the Frida, as an avid movie watcher, it’s great to have a place to go where many classic, cult and underrated films are shown. I had the pleasure of attending “The Decline of Western Civilization” screening with director Penelope Spheres doing a Q&A. Her films are so historically important and impacted me at a very young age. I am forever grateful for the experience, like nowhere else would this be possible. I think it’s truly amazing what the staff and everyone involved is doing for the … END_OF_DOCUMENT_TOKEN_TO_BE_REPLACED

What a hidden gem! I had such a lovely time at a recent showing of Godzilla (1954). This theater is a bit timeworn, yet undeniably quaint and charming with an unconventional feel. And interestingly enough, the audience served as the sweet element of surprise. Those in attendance created an atmosphere of delight, comfort, and personal acceptance… and get this.. there was an actual host who presented a brief preface to the film just prior to viewing. Very collegiate, which I loved!  All in all pe… END_OF_DOCUMENT_TOKEN_TO_BE_REPLACED