Jazz on a Summer’s Day

Filmed at the 1958 Newport Jazz Festival in Rhode Island and directed by world-renowned photographer, Bert Stern, Jazz on a Summer’s Day features intimate performances by an all-star line-up of musical legends including Louis Armstrong, Thelonius Monk, Gerry Mulligan, Anita O’Day, Chuck Berry, Dinah Washington. The film closes with a beautiful rendition of “The Lord’s Prayer” by Mahalia Jackson at midnight to usher in Sunday morning. 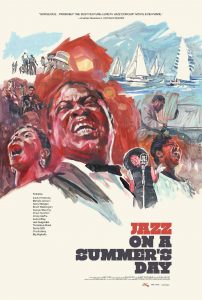 The 1959 classic is considered one of the most extraordinary and possibly the first concert film ever made. Its sparkling new 4K restoration by IndieCollect, recently premiered at the 57th New York Film Festival. The film was named to the National Film Registry in 1999, and its restoration was funded by the National Film Preservation Board of the Library of Congress in time to celebrate the film’s 60th Anniversary.

Link to purchase tickets to stream this film in our Virtual Cinema will be available on Friday, August 14th (Thursday at Midnight) until Thursday, August 27th. To purchase and stream, click the button below!

“Outstanding. It’s Americana and a document of its time. Some unprecedented effects are achieved by cameraman Bert Stern.” — Variety

“Scenically and sonically, Jazz on a Summer’s Day is great.” — The New York Times

“A dazzling array of jazz and rock’n’roll giants are captured on celluloid. Unquestionable highlight is the extraordinary Mahalia Jackson, whose soulful renditions send a shiver down the spine.” — Time Out

LOVE this theater..OMG. I’ve been here several times now for different events. I’ve attended 2 of the 3 Scott Pilgrim events thrown by Cinemattack. I was even the lucky winner of the Scott Pilgrim album on vinyl. I don’t have a record player..but may as well be a trophy for me because I never win anything! lol. I also attended “The Last Unicorn” event with Peter S Beagle- the author speaking and answering a Q and A afterwards. This was so awesome. I have always loved loved this movie and it was … END_OF_DOCUMENT_TOKEN_TO_BE_REPLACED