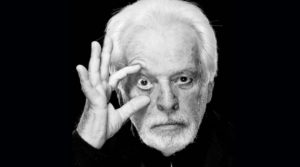 Our Pop-Up Drive-In is off to Joshua Tree with
Psychomagic, El Topo, & The Holy Mountain!

At long last, the groundbreaking and unforgettable films of acclaimed artist Alejandro Jodorowsky will be available in 4K Restorations as part of a boxed set by ABKCO Music & Records, Inc.!   To celebrate their release — as well as the release of new documentary Psychomagic, A Healing Art — we are excited to present two double-feature Drive-In screenings pairing the documentary with Jodorowsky’s landmark 70’s works El Topo (1970) & The Holy Mountain (1973)!

And what better place to bring these experiences to you than in the middle of the desert! With major gratitude to Joshua Tree Music Festival, we invite you to join us under the canopy of stars at Joshua Tree Lake RV & Campground for what is certain to be a mesmerizing weekend in the desert!

Tickets are $30 per car + service fee, regardless of number of individuals in car.

First up is Psychomagic, A Healing Art + El Topo on Friday, August 21st! 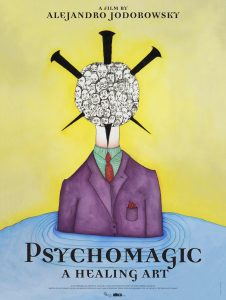 Alejandro Jodorowsky’s new documentary Psychomagic, A Healing Art provides an intimate exploration of the visionary director’s theory of trauma therapy. His unique concept of healing uses performance art as a vehicle to counter deep, debilitating psychic suffering with literal ‘acts of confrontation’ in real world applications. Drawing from a life-long study of philosophy, psychology, ethnology, and world religions, from Freud to shamans, from Kabbalah to Gurdjieff, and everything in between, Jodorowsky’s films have dealt with the individual quest for redemption and enlightenment, the protagonist facing bizarre and provocative challenges that lead to personal catharsis. The film his explores the director’s therapeutic work of Psychomagic using real life subjects in real world situations. Jodorowsky explains and demonstrates Psychomagic’s principles, how it is practiced, and how it is applied. The Maestro works directly with suffering people who are eager to face, resolve, and transcend their personal dilemmas through the use of this radical and transformative mode of performance art therapy. Intercut with scenes from his most famous films, it parallels and explains his intent and vision present from the start of his career, giving new perspective and meaning to his seminal works, while simultaneously breaking the wall between fictional and real.  Click here to watch the film’s trailer!

Portions of Psychomagic, A Healing Art are in Spanish, with English subtitles. 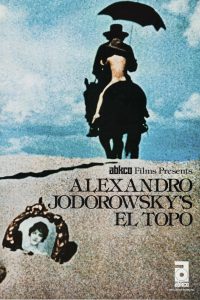 After a short break, join us for the new 4K Restoration of “the original Midnight Movie,” El Topo! Famously, John Lennon and Yoko Ono discovered El Topo and were impressed with the surreal, bizarre, and visceral imagery which was presented in a ‘psychedelic-western’ theme of personal transformation. The film was so controversial, when The New York Times published a review dismissing it, outcries from the film’s supporters forced them to rethink their position. It was the first time in the venerable newspaper’s history where they bowed to public pressure and allowed a counter review. The legendary cult film was credited with starting the Midnight Movie phenomenon and firmly established Alejandro Jodorowsky as the master of the outrageous and the profound. In the late 1960s, when Spaghetti Westerns were all the rage, Alejandro Jodorowsky used the syntax and style of this genre as a vehicle to tell the surreal odyssey of mysticism and enlightenment. After abandoning his young son, a brazen gunslinger attempts to defeat four masters and become the preeminent, but he is betrayed and left for dead. Recused by an underground collection of socially shunned and forsaken dwarfs, paraplegic, and disfigured people, he finds redemption. When he attempts to return to the conventional world, he is confronted with a society of decadence and perversion. At the time, Mexico had strict rules about film making, severely limiting production. Alejandro circumvented the restrictions by shooting the script as short films, which became ‘chapters’ in the final film. He also engaged in guerrilla production tactics, most notably using an abandoned Hollywood film set they stumbled upon in the Mexican desert and converting it for the final act. This stunning and vibrant 4K restoration, from the original IP, is presented in 1:33 as it was presented in theaters in 1970, but is also available for the first time in 1:85 widescreen, overseen by Mr. Jodorowsky, who originally envisioned El Topo as a widescreen presentation in homage to Sergio Leone. Click here to watch the film’s trailer!

El Topo will be presented in its original Spanish soundtrack, with English subtitles.

Our second night in Joshua Tree brings you The Holy Mountain + Psychomagic, A Healing Art! 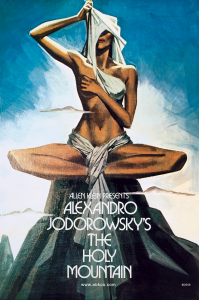 The scandal of the 1973 Cannes Film Festival, Jodorowsky’s The Holy Mountain unleashes a flood of sacrilegious imagery and existential symbolism in a kaleidoscopic and surreal sojourn for enlightenment, pitting illusion against truth. The Alchemist (Jodorowsky) assembles together an elite group of thieves – ‘industrialists and politicians’ – that represent the planets in the solar system. The master’s adept intention is to put his recruits through strange mystical rites and divest them of their worldly baggage before embarking on a trip to Lotus Island. There they ascend the Holy Mountain to displace the immortal gods who secretly rule the universe. Following his meteoric rise in the wake of El Topo, Alejandro was given a budget of $1 million dollars (equivalent to $4 million today) and total artistic freedom for his follow up project. He wrote the screenplay, designed the sets and costumes, co-wrote the music, directed and acted in the film. He rejected using known or professional actors, and instead employed persons with actual backgrounds that matched their characters for many key roles. The Holy Mountain is a mythical, mystical masterpiece, a Hieronymus Bosch painting come to life – part spiritual quest, part science fiction, part social satire, and completely without comparison.  Click here to watch the film’s trailer!

LOVE this theater..OMG. I’ve been here several times now for different events. I’ve attended 2 of the 3 Scott Pilgrim events thrown by Cinemattack. I was even the lucky winner of the Scott Pilgrim album on vinyl. I don’t have a record player..but may as well be a trophy for me because I never win anything! lol. I also attended “The Last Unicorn” event with Peter S Beagle- the author speaking and answering a Q and A afterwards. This was so awesome. I have always loved loved this movie and it was … END_OF_DOCUMENT_TOKEN_TO_BE_REPLACED