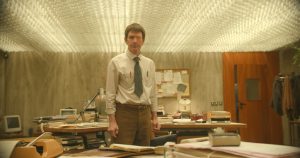 The latest deranged delight by French absurdist Quentin Dupieux, Keep An Eye Out is a breakneck-paced cop comedy that packs more laughs into its 73 breezy minutes than some filmmakers manage in their entire careers.

Belgian funnyman Benoît Poelvoorde (Man Bites Dog) is Commissaire Buran, a good, bad cop interrogating Fugain, (Grégoire Ludig), an average Joe who discovered a dead body outside his apartment building. As the film begins, Fugain must, on an empty stomach, explain how and why he happened to leave home seven times in one night before coming across a corpse in a puddle of blood. Since he’s the investigation’s only suspect, Fugain’s anxiety is already sky-high when Buran leaves him alone with Philippe, a one-eyed rookie cop with bizarre speech patterns and a few minutes to live. Bloody, batshit hijinks ensue, and before long, we’re in Buñuel territory.

Between the opening sequence, when a man in just red briefs conducts a philharmonic orchestra in the open air, and the triple-meta denouement, Dupieux’s whip-smart script disregards audience expectations, the fourth wall, and the laws of time and space. You’ll never look at a protractor or an oyster the same way again.

Keep an Eye Out | Trailer from Dekanalog on Vimeo.

I love the Frida, as an avid movie watcher, it’s great to have a place to go where many classic, cult and underrated films are shown. I had the pleasure of attending “The Decline of Western Civilization” screening with director Penelope Spheres doing a Q&A. Her films are so historically important and impacted me at a very young age. I am forever grateful for the experience, like nowhere else would this be possible. I think it’s truly amazing what the staff and everyone involved is doing for the … END_OF_DOCUMENT_TOKEN_TO_BE_REPLACED

What a hidden gem! I had such a lovely time at a recent showing of Godzilla (1954). This theater is a bit timeworn, yet undeniably quaint and charming with an unconventional feel. And interestingly enough, the audience served as the sweet element of surprise. Those in attendance created an atmosphere of delight, comfort, and personal acceptance… and get this.. there was an actual host who presented a brief preface to the film just prior to viewing. Very collegiate, which I loved!  All in all pe… END_OF_DOCUMENT_TOKEN_TO_BE_REPLACED

LOVE this theater..OMG. I’ve been here several times now for different events. I’ve attended 2 of the 3 Scott Pilgrim events thrown by Cinemattack. I was even the lucky winner of the Scott Pilgrim album on vinyl. I don’t have a record player..but may as well be a trophy for me because I never win anything! lol. I also attended “The Last Unicorn” event with Peter S Beagle- the author speaking and answering a Q and A afterwards. This was so awesome. I have always loved loved this movie and it was … END_OF_DOCUMENT_TOKEN_TO_BE_REPLACED