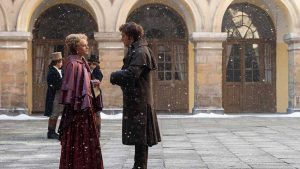 Bonn, 1779. Eight-year-old Louis van Beethoven (Colin Pütz) grows up in provincial Bonn and is considered a musical prodigy. Attempts by his father Jean to teach the boy fail. The singer and actor Tobias Pfeiffer and the Bonn court organist Christian Gottlob Neefe take on the young genius and shape him in very different ways. Ludwig learns to go his own way, but offends society.

A momentous encounter with Wolfgang Amadeus Mozart in Vienna and the political upheavals of the time, which culminated in the French Revolution, aroused a freedom-loving spirit in the young Beethoven. The missed love for the young noblewoman Eleonore von Breuning and a series of family tragedies almost made Ludwig give up until he moved to Vienna in the winter of 1792 for an apprenticeship with Joseph Haydn.

All this is embedded in a framework story in which the older Beethoven (Tobias Moretti) stays on the estate of his brother Johann and his wife Therese shortly before his death in 1826. Despite his great successes, most recently with the Ninth Symphony, Beethoven struggles with himself because his late work completely overwhelms his contemporaries. Now completely deaf, he looks back at missed opportunities.

I love the Frida, as an avid movie watcher, it’s great to have a place to go where many classic, cult and underrated films are shown. I had the pleasure of attending “The Decline of Western Civilization” screening with director Penelope Spheres doing a Q&A. Her films are so historically important and impacted me at a very young age. I am forever grateful for the experience, like nowhere else would this be possible. I think it’s truly amazing what the staff and everyone involved is doing for the community. They bring the magic of the silver screen without charging you an arm & a leg to attend their special events/screenings. I highly encourage any film lover to check out the Frida, no matter what film you choose, you will not be disappointed! They have an awesome online presence as well (IG, Website) where you can ask any them any questions or view their monthly calendar. They also host local art shows, film festivals showcasing new artists and film-makers. … END_OF_DOCUMENT_TOKEN_TO_BE_REPLACED