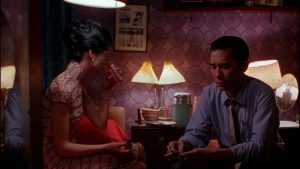 Isolation has made relationships…difficult, to say the least. However, this isn’t the first time in history that maintaining a certain distance would be considered a crucial aspect of polite behavior. Even with the advantage of telecommunication, distancing has made maintaining relationships—romantic or otherwise—feel almost Victorian. Loneliness has developed a nasty habit of running rampant. Will absence make our hearts grow fonder? I guess we’ll find that out for ourselves once all this is over. In the meantime, here are five period romances to channel all that longing into.

Hong Kong filmmaker Wong Kar-wai’s In the Mood for Love is frequently heralded as a hallmark of Asian cinema. Set in 1960s British Hong Kong, the film tracks the relationship between secretary Su Li-zhen (Maggie Cheung) and journalist Chow Mo-wan (Tony Leung), who rent adjacent rooms in an apartment with their respective spouses. Su and Chow’s budding friendship faces complications, from the conservative social climate that regards friendship between men and women with suspicion—and from the realization that their respective spouses are having an affair with each other. Every word, every silence, every moment of In the Mood for Love has a palpable weight to it, and the simple intimacy of sharing food suddenly feels monumental.

In the background, Abbie Cornish as Fanny Brawne and Ben Whishaw as John Keats, with Edie Martin as Brawne’s younger sister in the foreground (Credit to Senses of Cinema)

Jane Campion, the only female recipient of the Palme d’Or (for her romantic drama The Piano (1993)), gives us an aching portrait of Romantic poet John Keats’ last few years and his relationship with Fanny Brawne. Fanny (Abbie Cornish) is a fashionable young woman who takes a liking to poet John Keats (Ben Whishaw), whose work is yet little known. Fanny’s pursuit of Keats does not begin smoothly; she has a reputation for being something of a flirt, and he hasn’t the money nor means to properly court her. Despite this, they fall in love, and Fanny becomes Keats’ muse, inspiring poetry that will prove to outlive them both.

In more of the Gothic vein of romance, there’s Cary Joji Fukunaga’s rendition of Charlotte Bronte’s classic novel Jane Eyre. Orphaned and unloved, Jane (Mia Wasikowska) nonetheless maintains an independent spirit. She takes a position at Thornfield Hall as a governess to a girl under the guardianship of the severe and mysterious Edward Rochester (Michael Fassbender). Jane and Rochester are similar strains of strange and solitary, and they are all too aware that they bound by money, class, and the lingering ghosts of their pasts. As Jane will soon find out, Thornfield Hall harbors secrets of its own, and she will have to summon all her conviction to find her place in life.

Admittedly, Park Chan-wook’s The Handmaiden is the tonal standout in this list. What initially seems to be a mystery/thriller set during the Japanese occupation of Korea ultimately becomes a tale of two young women, pickpocket and grifter Nam Sook-hee (Kim Tae-ri) and the economically privileged Lady Hideko (Kim Min-hee), becoming each other’s salvation. With the twists one may expect of a Park Chan-wook film, The Handmaiden is a riveting and romantic tale of women wielding their agency and together escaping their oppressive environments.

What kind of list would this be if it didn’t include a Keira Knightley period drama? In Joe Wright’s adaptation of Jane Austen’s novel, Elizabeth Bennet (Keira Knightley) and Fitzwilliam Darcy (Matthew Macfadyen) dance—literally, at one point—around their attraction to each other, restrained by their own stubbornness as much as class difference. Lizzie and Darcy steadfast and resolute in their conviction to detest one another…until they each come to the realization that the other is more than what they may seem.

I love the Frida, as an avid movie watcher, it’s great to have a place to go where many classic, cult and underrated films are shown. I had the pleasure of attending “The Decline of Western Civilization” screening with director Penelope Spheres doing a Q&A. Her films are so historically important and impacted me at a very young age. I am forever grateful for the experience, like nowhere else would this be possible. I think it’s truly amazing what the staff and everyone involved is doing for the community. They bring the magic of the silver screen without charging you an arm & a leg to attend their special events/screenings. I highly encourage any film lover to check out the Frida, no matter what film you choose, you will not be disappointed! They have an awesome online presence as well (IG, Website) where you can ask any them any questions or view their monthly calendar. They also host local art shows, film festivals showcasing new artists and film-makers. … END_OF_DOCUMENT_TOKEN_TO_BE_REPLACED