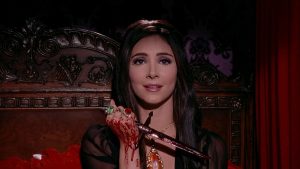 “Horror is a lot like comedy, you feel whether it’s working or not.” — Ari Aster

Based on a 5-second sketch from the appropriately named troupe 5-Second Films, Dude Bro Party Massacre III plays as a wonderful homage to campy, slasher films, following a frat party at a cabin in the woods and a bro-hunting serial killer who proves to be a real fun-slayer. With a supporting cast including Greg Sestero (The Room) and Patton Oswalt (Ratatouille) and cameos by Larry King and Andrew W.K., 5-Second Films creates rapid-fire comedy, packing a dizzying array of laughs into the film’s brief run time.

From the director of Blue Ruin and Green Room, Jeremy Saulnier’s directorial debut, Murder Party is surprisingly similar to his later films. Following a loner parking officer who gets invited to a “murder party” and ends up being hunted by a group of pretentious art students, Murder Party started a trend of protagonists on the run from a violent group of murderers. While Saulnier’s later films are presented as deeply serious, Murder Party portrays its violence with slapstick humor, making no attempt to create empathy for its pathetic hero. Saulnier fans will love seeing the early stages of his filmmaking prowess.

The Love Witch was a personal passion project for its director Anna Biller, who also wrote, edited, and scored the film as well as designed the film’s production and costumes. Shot to match the 1960s technicolor aesthetic and written to embrace the camp of 1960s horror, The Love Witch follows recently widowed Elaine as she uses potions and spells to seduce men in her desperate search for affection. The film’s spellbinding technicolor is bolstered by a universally lauded performance from Samantha Robinson who deftly balances the film’s tone of horror and comedy.

Since the 2004 hit film Shaun of the Dead, zombie comedies have become commonplace in American film, but none of the post-Shaun films hold a candle to Shinichiro Ueda’s One Cut of the Dead. It is best to go into this high-concept film with as little knowledge as possible, so if you plan on watching this film do not watch any trailer or read any plot summary. Just know that the film breathes life into the zombie comedy genre with its delightful gags and plays as an homage to zombie films and to cinema as a whole.

Fans of backwoods horror will revel in Eli Craig’s riotous directorial debut Tucker & Dale vs Evil. As seen in the recent Netflix film Little Evil, Eli Craig has a talent for turning established horror tropes on their heads—with hilarious results. In Tucker & Dale vs Evil, the titular brothers build a cabin in the woods hoping to have a quiet and peaceful retreat. When a group of awful teenagers breaks onto their property, the brothers attempt to be friendly, but blunder into frightening the teens into a series of gut-busting bloodbaths.

I love the Frida, as an avid movie watcher, it’s great to have a place to go where many classic, cult and underrated films are shown. I had the pleasure of attending “The Decline of Western Civilization” screening with director Penelope Spheres doing a Q&A. Her films are so historically important and impacted me at a very young age. I am forever grateful for the experience, like nowhere else would this be possible. I think it’s truly amazing what the staff and everyone involved is doing for the community. They bring the magic of the silver screen without charging you an arm & a leg to attend their special events/screenings. I highly encourage any film lover to check out the Frida, no matter what film you choose, you will not be disappointed! They have an awesome online presence as well (IG, Website) where you can ask any them any questions or view their monthly calendar. They also host local art shows, film festivals showcasing new artists and film-makers. … END_OF_DOCUMENT_TOKEN_TO_BE_REPLACED