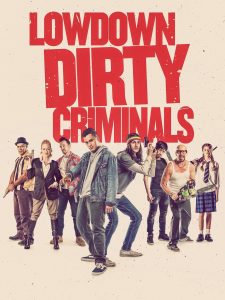 A uniquely and distinctly kiwi take on the buddy comedy film, Lowdown Dirty Criminals features rising NZ star James Rolleston in a solidifying performance and as many laugh-out-loud moments as your typical crime caper-turned-thrilling-heist-turned-heartwarming-tale-of-friendship film.

When Freddy loses his job delivering pizza, he and his best buddy Marvin find work with a small time crook, Spiggs. After they botch a straightforward job, Spiggs sends them on a fool’s errand – to kill gangster Donny Kong, who’s been sleeping with Spiggs’ wife. When the wrong guy ends up dead, Freddy and Marvin find themselves crossing paths with someone even scarier than their boss – über gangster The Upholsterer and her hapless henchmen Semo and Roy. The ensuing chaos escalates into a world of hilarity and violence that’ll threaten their lives and force them to re-evaluate their career choices.

What a hidden gem! I had such a lovely time at a recent showing of Godzilla (1954). This theater is a bit timeworn, yet undeniably quaint and charming with an unconventional feel. And interestingly enough, the audience served as the sweet element of surprise. Those in attendance created an atmosphere of delight, comfort, and personal acceptance… and get this.. there was an actual host who presented a brief preface to the film just prior to viewing. Very collegiate, which I loved!  All in all pe… END_OF_DOCUMENT_TOKEN_TO_BE_REPLACED

LOVE this theater..OMG. I’ve been here several times now for different events. I’ve attended 2 of the 3 Scott Pilgrim events thrown by Cinemattack. I was even the lucky winner of the Scott Pilgrim album on vinyl. I don’t have a record player..but may as well be a trophy for me because I never win anything! lol. I also attended “The Last Unicorn” event with Peter S Beagle- the author speaking and answering a Q and A afterwards. This was so awesome. I have always loved loved this movie and it was … END_OF_DOCUMENT_TOKEN_TO_BE_REPLACED