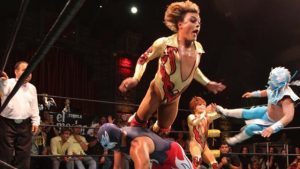 As we at The Frida Cinema prepare for the opening of Marie Losier’s documentary Cassandro, the Exotico (August 9th–15th), let us look back at the history of lucha cinema on the silver screen.

The cinematic debut of one of the most influential luchadors of all time, Mil Mascaras is an important film for those looking to be introduced into the world of lucha cinema. The film follows Mil Mascaras, an orphan adopted by scientists who put him through a rigorous regimen of diet and exercise, turning him into a superhero.

What makes Mil Mascaras a great entry in this genre is that the movie’s plot centers around the world of lucha libre. As a result, the film features some of the best in-ring action from a lucha libre film.

Most lucha libre films star a real-life luchador. However, the 1952 film Huracan Ramirez is a notable exception. Starring actor David Silva, Huracan Ramirez is the most plot-driven film on this list. The film follows Fernando Torres, son of a washed-up luchador Tonina Jackson, who drops out of college and becomes a masked luchador to help his families finances, against the wishes of his father.

Although a fictional character, several pros would adopt the identity of Huracan Ramirez in the ring. Daniel Garcia Arteaga wrestled as the character for over 30 years and became one of the most iconic luchadors of all time.

One of the first of many films that match an iconic luchador against a supernatural villain. To understand this film, one must begin by understanding El Santo’s place in Mexico’s history. A 2003 nationwide poll ranked him the fourth most beloved figure in Mexico history, above generals and presidents. A major part of his legacy as a Mexican folk hero is his colorful filmography in which he fights a slew of supernatural villains.

The most famous of these is Santo vs Las Mujeres Vampiro, in which Santo is called upon by a professor to save his daughter from abduction by a female Vampire named Tundra. Santo vs Las Mujeres Vampiro is notable for being one of the few lucha libre films from the time to be dubbed in English, which resulted in one of the best Mystery Science Theater 3000 episodes ever.

By the 21st century, Mexico mostly gave up on lucha cinema, having outgrown the cheesy b-movie action and plots that have become synonymous with the genre. However, in 2007, American distribution company Osmium Entertainment released Mil Mascaras vs The Aztec Mummy, the first lucha libre film to be produced in English. A first glance at the film’s history would make anyone suspicious of the film’s prospects. It wasn’t shot in Mexico by Mexican filmmakers, but at the University of Columbia by a group of engineering students. Even worse, the film’s star, Mil Mascaras, was 69 years old at the film’s release.

Despite all this, Mil Mascaras vs The Aztec Mummy turned out to be one of the most entertaining films of its genre and a wonderful homage to the b-movies of the prior century. The film was screened at the festival circuits to rave reviews and won many awards and nominations. It sparked a trilogy of films and is the best film to introduce an English-speaker to lucha cinema.

And they say Avengers: Endgame was the most ambitious crossover in film history…

There is very little I should say about Santo and Blue Demon vs the Monsters. It is a masterpiece of cinema that must be seen to be believed. It involves a mad scientist and his hunchback dwarf assistant creating a series of monsters to fight Santo and fellow iconic luchador Blue Demon.

There are no more words to describe this film’s lunacy, so here is a clip of Santo fighting a cyclops.

What a hidden gem! I had such a lovely time at a recent showing of Godzilla (1954). This theater is a bit timeworn, yet undeniably quaint and charming with an unconventional feel. And interestingly enough, the audience served as the sweet element of surprise. Those in attendance created an atmosphere of delight, comfort, and personal acceptance… and get this.. there was an actual host who presented a brief preface to the film just prior to viewing. Very collegiate, which I loved!  All in all pe… END_OF_DOCUMENT_TOKEN_TO_BE_REPLACED