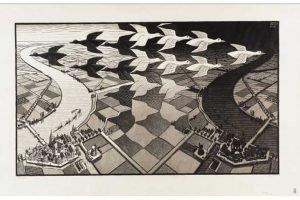 M.C. Escher: Journey To Infinity is the story of world famous Dutch graphic artist M.C Escher (1898-1972). Equal parts history, psychology, and psychedelia, Robin Lutz’s entertaining, eye-opening portrait gives us the man through his own words and images: diary musings, excerpts from lectures, correspondence and more are voiced by British actor Stephen Fry, while Escher’s woodcuts, lithographs, and other print works appear in both original and playfully altered form. Two of his sons, George (92) and Jan (80), reminisce about their parents while musician Graham Nash (Crosby, Stills & Nash) talks about Escher’s rediscovery in the 1970s.

The film looks at Escher’s legacy: one can see tributes to his work in movies, in fiction, on posters, on tattoos, and elsewhere throughout our culture; indeed, few fine artists of the 20th century can lay claim to such popular appeal.

LOVE this theater..OMG. I’ve been here several times now for different events. I’ve attended 2 of the 3 Scott Pilgrim events thrown by Cinemattack. I was even the lucky winner of the Scott Pilgrim album on vinyl. I don’t have a record player..but may as well be a trophy for me because I never win anything! lol. I also attended “The Last Unicorn” event with Peter S Beagle- the author speaking and answering a Q and A afterwards. This was so awesome. I have always loved loved this movie and it was … END_OF_DOCUMENT_TOKEN_TO_BE_REPLACED