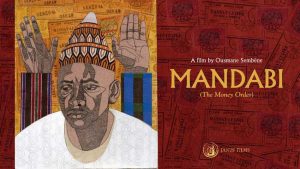 This second feature by Ousmane Sembène was the first movie ever made in the Wolof language—a major step toward the realization of the trailblazing Senegalese filmmaker’s dream of creating a cinema by, about, and for Africans. After jobless Ibrahima Dieng receives a money order for 25,000 francs from a nephew who works in Paris, news of his windfall quickly spreads among his neighbors, who flock to him for loans even as he finds his attempts to cash the order stymied in a maze of bureaucracy, and new troubles rain down on his head. One of Sembène’s most coruscatingly funny and indignant films, Mandabi—an adaptation of a novella by the director himself—is a bitterly ironic depiction of a society scarred by colonialism and plagued by corruption, greed, and poverty.

I love the Frida, as an avid movie watcher, it’s great to have a place to go where many classic, cult and underrated films are shown. I had the pleasure of attending “The Decline of Western Civilization” screening with director Penelope Spheres doing a Q&A. Her films are so historically important and impacted me at a very young age. I am forever grateful for the experience, like nowhere else would this be possible. I think it’s truly amazing what the staff and everyone involved is doing for the community. They bring the magic of the silver screen without charging you an arm & a leg to attend their special events/screenings. I highly encourage any film lover to check out the Frida, no matter what film you choose, you will not be disappointed! They have an awesome online presence as well (IG, Website) where you can ask any them any questions or view their monthly calendar. They also host local art shows, film festivals showcasing new artists and film-makers. … END_OF_DOCUMENT_TOKEN_TO_BE_REPLACED