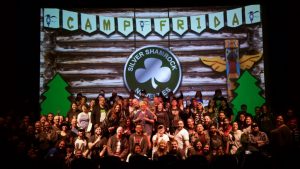 Camp Frida: I had begun an internship for the theater in July. By the time October rolled around, the event was coming up and it was looking like we would be short-handed with volunteers. Logan, The Frida’s founder, had kindly asked me if I would like to sign up for the night shift, 3am-9am. With nothing else better to do, and a desire to help out, I accepted. To preface this, I had not been downstairs working concessions very often as an intern. I stayed upstairs, working with Logan, occasionally seeing other staff members and volunteers pass through the narrow corridor of The Lab (formerly the office).

I drove to the theater, groggy-eyed from a refusal to take a nap, but expecting a rejuvenating second wind of insomnia. With a shield of inherent shyness, and an unfamiliarity for the people or my tasks, I hesitantly walked through those doors with my denim jacket, plastic Holga camera in one hand, Proust’s Swann’s Way in the other, and hopped behind the counter.

I introduced myself to the group of about 8 or 10 volunteers, then I stood quietly, reading, waiting for a chance to do my part, but silently observing the vigor and camaraderie between the volunteers. After a short while, a volunteer came up to me and struck a conversation. We talked about books for a bit, naturally transitioning into films. One by one, more people tagged in on the conversation. Favorite films, critically panned films that had actual merit, revered films that are in fact terrible, the quintessential discussion of A24 films amongst all youth (stemming from me showing off my Lady Bird name patch that I use as a bookmarker), and the occasional conspiracy theory; we all bounced off one another as the casual audience member, 8 hours through the marathon, would scurry in a daze towards the counter for a vitalizing cup of black coffee or some extra popcorn and soda, unknowingly passing by the giant projection of a Twitch.tv stream of Outlast 2 gameplay put on by a volunteer. The night went on, and as morning approached, the initially expected group of 2 people for the night shift turned into 4 or 5 extra volunteers staying ’til the sun came up. One volunteer even braved the storm of sleep deprivation to come back for their regular shift that night.

This was the first time in which I had spoken to others about movies without the feeling of being an outsider. At school, most students in the film program were already in their own cliques, making their own films together, so there was a certain coldness and inaccessibility. At home, there was always some sort of separation, as my closest friends weren’t engaged in films and filmmaking with the same fervor. Watching films and going to the theater was quite a selfish act, not because cinema necessarily should or shouldn’t be a secretive activity (although, personally it feels a tad surreptitious), but more so out of circumstance — I had no one to talk to about the films I was watching!

An important digression, but I grew up playing basketball, and it was my identity (“oh yeah the one on the basketball team?” was often heard). It completely encompassed my life, and amidst the awkwardness and uncertainty of adolescence, I had been handed a superpower of some sorts, a form of invincibility from my angst and alienation. I had it mapped out from the age of 15: Walk-on at a junior college, transfer to a Division 1 college team, play overseas, become a coach, help kids have the resources and structure that I never had. As I got to college, those dreams suddenly slipped away, and I felt lost for a while, bitter, resentful, unhappy. Then I found cinema, and I felt indebted to it, but still remaining was a sense of loss that I hadn’t reconciled and couldn’t explain.

After that night at The Frida, I could finally articulate it. The thing in which I had been longing for but couldn’t put a finger on was there, in the flesh, no longer ephemeral. The memories of long bus rides for basketball tournaments, of 15 kids wreaking havoc at local diners after a win, of togetherness, surrounded by something we loved, feeling safe from ‘the real world’. I was reminded of them. I had learned that maybe my love was more so of these interactions and what the sport had given me rather than the sport itself.

In the same way, this is what I believe I rediscovered with cinema and being a part of The Frida — that it isn’t just the act of watching films, but sharing a passion for it, to feel connected with people, with humanity. These things made me feel invincible again, as if I was the same untarnished, innocent youth suffering with my teammates during sprints. It also confirmed to me that this is important — The Frida Cinema and what it stands for, what it embodies, not only in Downtown Santa Ana, but in the community of those who love films, of those who love going to the cinema. Now that I’ve been working at the theater for a few months, I can firmly grasp the importance of what we do, of being community leaders and encouraging the arts.

We’re fortunate to have a gathering place to be overwhelmingly enamored by films; others are less so, as their local art-house theater faces the precariousness of an uncertain future, not knowing if they’ll be able to re-open due to the current pandemic that confronts mankind. In spite of the pain faced by our fellow art-houses, it is why I’m so grateful, it is why I feel so tethered to The Frida. It offers something in which I think all of us, whether we know it or not, are searching for: a sense of belonging, of acceptance, of community, of family.

Yet, perhaps we don’t look for cinema as much as it finds us, wandering along. Offering us an open hand and the affirmation that we aren’t by ourselves. Telling us to reach out, assuring us that our pain will subside, that everything will be alright. I hope that whenever it is safe enough to re-open our doors, I’ll be able to look at everyone that walks through, and we’ll all know, unspoken and unstated, that we’re understood, that we’ve got each other.

What a hidden gem! I had such a lovely time at a recent showing of Godzilla (1954). This theater is a bit timeworn, yet undeniably quaint and charming with an unconventional feel. And interestingly enough, the audience served as the sweet element of surprise. Those in attendance created an atmosphere of delight, comfort, and personal acceptance… and get this.. there was an actual host who presented a brief preface to the film just prior to viewing. Very collegiate, which I loved!  All in all pe… END_OF_DOCUMENT_TOKEN_TO_BE_REPLACED