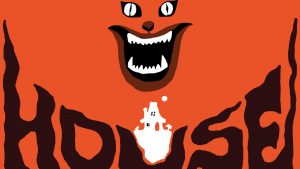 There are many films that define The Frida Cinema as a theater. You can walk into the lobby at the brick and mortar and look up at our fantastic mural if you want to see the hundred or so movies that have either done well for us or mean something to our staff or board of directors. One that you’ll see up there is Nobuhiko Obayashi’s cult classic Hausu, represented by a large, quite frightening orange cat that was made famous by its bombastic Criterion Collection cover art.

Early on in my days as a volunteer, the theater partnered with the sorely missed OC Weekly magazine to present a cult series called Fright Night Freakouts—a series of movies that we played every Friday night at 11pm. Some of the earliest titles that played for the series were Alejandro Jodorowsky’s The Holy Mountain and El Topo, The Texas Chainsaw Massacre, Donnie Darko, Lucio Fulci’s Cat in the Brain, etc. But my personal favorite of the early screenings was, of course, Hausu—a movie I had never seen on the big screen before.

The early days of the Friday Night Freakout series (now called Frida After Dark) were defined by a few things, but one of them was the distinct lack of punctuality that the crowds had. Most folks would show up at exactly 11pm for the film, causing the movie to start 10-15 minutes late. This was one of those nights, for sure. The Hausu crowd is nothing if not a bunch of lovable slackers. I was genuinely delighted to see the amount of people who showed up for the film, which is an off-beat, Japanese, genre-defying mess. After the film eventually started, I snuck in more than a few times to see what the vibe in the theater would be, and I was not disappointed. People were having a Hell of a time. Laughing, screaming, and overall just having a blast with it. It was the first time sans Rocky Horror Picture Show that I had seen an audience reacting that way, completely unprompted in their response to a movie on the big screen.

Long after the final credits rolled, the close-to one hundred people that showed up to the screening were giddily discussing it in the lobby and outside under the marquee. Many of them were people who came to the showing alone! This was a first for me as a volunteer; I finally saw first hand the kind of community and relationship-building that The Frida Cinema could provide. I knew that I would not be going home until everyone left that front door, but I didn’t care—I wanted them to stay until they could even remotely parse out what they had just seen. And trust me, it was a while.I was lucky enough to  finally see it on the big screen myself only a few weeks ago at a Secret Movie Club screening (my favorite programming in Los Angeles, if you ever wanna see something on film at an awesome venue) on 35mm at the now defunct Million Dollar Theater in Downtown LA. If you haven’t seen Hausu—take the 90 minutes to check it out. It’s one of the most exciting pieces of filmmaking ever made simply because Obayashi refuses to give the audience a moment of un-challenging cinema. There’s never a single second of uninteresting visuals going on, coupled by some truly over-the-top performances.

This week, the director of Hausu, Nobuhiku Obayashi, passed away. As the programmer at The Frida, I vow to continue to play it every six months or so. It will always have a special place in my heart because of that first screening I witnessed almost three and a half years ago. Rest easy, Mr. Obayashi, and thank you for your tremendous contribution to the world of weird cinema.

LOVE this theater..OMG. I’ve been here several times now for different events. I’ve attended 2 of the 3 Scott Pilgrim events thrown by Cinemattack. I was even the lucky winner of the Scott Pilgrim album on vinyl. I don’t have a record player..but may as well be a trophy for me because I never win anything! lol. I also attended “The Last Unicorn” event with Peter S Beagle- the author speaking and answering a Q and A afterwards. This was so awesome. I have always loved loved this movie and it was … END_OF_DOCUMENT_TOKEN_TO_BE_REPLACED

What a hidden gem! I had such a lovely time at a recent showing of Godzilla (1954). This theater is a bit timeworn, yet undeniably quaint and charming with an unconventional feel. And interestingly enough, the audience served as the sweet element of surprise. Those in attendance created an atmosphere of delight, comfort, and personal acceptance… and get this.. there was an actual host who presented a brief preface to the film just prior to viewing. Very collegiate, which I loved!  All in all pe… END_OF_DOCUMENT_TOKEN_TO_BE_REPLACED