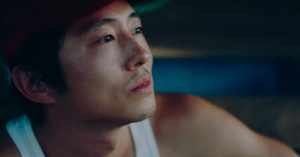 It didn’t take long for me to realize how special watching Minari felt. I’m willing to admit that being in the grand vicinity of the Eccles Theatre during last year’s Sundance lended a fair amount of preciousness to the general experience, but I also know that to remove that experience is to in no way undo its impact. From the opening fade-in and very first note of Emile Mosseri’s heavenly score, writer/director Lee Issac Chung mines a story so personal and rooted from memory, yet provides so much empathy and universality on the other side of the coin that it almost feels as if his story could just as well be experienced by those who watch it. It also seemed to have not taken long for its role endowed by the media as “the film we need right now” to be firmly represented on the film’s own poster. And for certainly good reason.

Chung’s storytelling operates as an ocean of emotion. Its opening sequence sending echoes of the gentle sincerity of Edward Yang’s Yi Yi, but honing a craft that only could have stemmed from the most specific of recollections. With Minari, I could start from anywhere, whether it be the spellbinding acting work from everyone involved – particularly Steven Yeun and Han Ye-ri as conflicting parents of a Korean-American family one decade into their emigration, or the warmly engaging atmosphere boosted by Emile Mosseri’s score, who after The Last Black Man in San Francisco and Kajillionaire, now establishes himself as one of our most essential modern film composers, or how Alan Kim is a bonafide star in the making. But with two of our drive-in screenings sold out (with tickets to an additional third still available!), I’m certain that audiences will be able to find for themselves what has made the film resonate this deeply since its Sundance premiere and subsequent winning of the Grand Jury Prize.

So instead I’ll cap off this post with a poem. Lately I’m finding myself more easily able to emulate how I process and respond to works that I know will stay with me. Minari presents itself as a film radiating with confidence, yet never willing to let it overshadow its understated approach, going as far as to let the physicality and actions of its performers speak more volumes than an abundance of dialogue ever could. Its muted approach often allowing emotion and expression to inform the growing distance between certain characters, and a tethering closeness between others. As a film about identity and cultural assimilation, it’s hard to think of a more appropriate occasion for it to arrive in the midst of. But it’s only a mere portion of what Chung provides to his script, allowing for the film to be, above all, one that transcends into the universal understanding of family dynamics, the tensions of environments strange and new, and how to move forward in that environment as a whole, rather than as one. It’s a film for everyone, and for anyone seeking something to offer a relieving sense of clarity, which can only come as much-needed these days. In the past year since watching it, certain images and moments continue to come back around to my brain. It’s around here where I’ll try and convey them as fluently as I can. In any case, if a film makes me compelled to write a poem, it’s normally one that I would recommend. So I hope you enjoy, and perhaps compelled to attend a drive-in.

down low i see below

the mud that makes things grow

up up and away i look

i run through endless patches

the green ends and turns brown

i slide downwards through earth

into a realm of forestry

known by only me

secrets lie down below

the smell of streams and bark

hides the world i grow beneath

i kneel and wait for it to swell

sprouting to the core

in my head i ponder

will you still be around

when i am as old as you?

one day i’ll run the other direction

i’ll grow more worlds than one

i’ll tend to their needs

i’ll embrace every fiber of them

give me time and give me years

and i will forget where i ran

but i will know where home is

it will move and it will stay still

today it will move with wind

What a hidden gem! I had such a lovely time at a recent showing of Godzilla (1954). This theater is a bit timeworn, yet undeniably quaint and charming with an unconventional feel. And interestingly enough, the audience served as the sweet element of surprise. Those in attendance created an atmosphere of delight, comfort, and personal acceptance… and get this.. there was an actual host who presented a brief preface to the film just prior to viewing. Very collegiate, which I loved!  All in all pe… END_OF_DOCUMENT_TOKEN_TO_BE_REPLACED