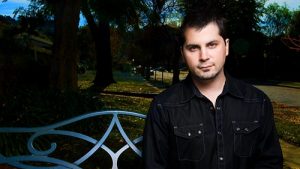 An Evening with Adam Green on Saturday, November 16th

Horror icon and short film auteur Adam Green will be gracing The Frida Cinema with his presence for a double feature of his splatter classics, Hatchet (2006) and Frozen (2010)! But wait, there’s more: in addition to joining us for the movies, Mr. Green will regale veteran fans and Greenverse newbies alike with commentary on his life and the trials and tribulations of his career that took him from Holliston, Massachusetts to Hollywood, California! In anticipation of this special event, we are celebrating his career in word-form.

Halloween has passed, but Green is a director whose work keeps the spooky spirit alive year-round. Every year for the last 20 years, Green and his loyal crew have released a new short movie in celebration of the Halloween season in addition to producing The Movie Crypt podcast and other various horror-focused internet shows. Green has also built a filmography of over 10 feature-length films under ArieScope Pictures, the production company that he cofounded.

After finding his footing in Hollywood in the early 2000s, Green would find himself standing shoulder to shoulder with fellow gore-horror directors, with the lot of them being dubbed “The Splat Pack” for their propensity to indulge in gore. Green always takes it one step further than the others, adding laugh out loud comedy and fun to his unique films – unsurprising, seeing as he did stand-up in the early 2000s alongside other then up-and-coming comedians like Andy Samberg, Chris Romano, and Eric Falconer.

Though Green began his feature-length film career in 2000 with Coffee & Donuts, a comedic self-portrait that is sadly out of print, he soon found a following with his 2006 offering Hatchet, which introduced audiences to his creepy character Victor Crowley. The film spawned several sequels and left a great impression on audiences and critics with these silly-style slashers. Green would also go on to direct and produce critically acclaimed surprise festival favorites, such as Spiral at the 2008 Santa Barbara International Film Festival and Grace at the 2009 Sundance Film Festival. 2010’s Frozen wound up being the project that launched him into global success, following it up with the The Movie Crypt and the fan-favorite TV show Holliston. Of course, he would return to feature filmmaking with his mockumentary Digging Up The Marrow and a surprise fourth installment to his Hatchet series simply titled Victor Crowley.

As he has steadily built his universe of horrifying and hilarious characters, Green continues to show that he has more up his sleeve. In his own, wise words: “Try something different. Make something that doesn’t make sense. Take risks, fall down, and get hurt a bunch on the way. You’ll heal and it will be OK. In the end, you just might find yourself holding the best thing you’ve ever created in your very hands because it is within your own pain that the stories worth telling actually exist.” Green is a filmmaker of the people, offering much of his work to audiences at no cost but their time and appreciation while remaining accessible to fans over the course of his career.

A hard-working, screen splattering, side-splitting, Halloween-loving visionary, Green is the director that no one asked for but Hollywood definitely needed. To commemorate the honor of hosting him for an evening, let’s revisit 10 of his must-see shorts at the links below!

What a hidden gem! I had such a lovely time at a recent showing of Godzilla (1954). This theater is a bit timeworn, yet undeniably quaint and charming with an unconventional feel. And interestingly enough, the audience served as the sweet element of surprise. Those in attendance created an atmosphere of delight, comfort, and personal acceptance… and get this.. there was an actual host who presented a brief preface to the film just prior to viewing. Very collegiate, which I loved!  All in all pe… END_OF_DOCUMENT_TOKEN_TO_BE_REPLACED

LOVE this theater..OMG. I’ve been here several times now for different events. I’ve attended 2 of the 3 Scott Pilgrim events thrown by Cinemattack. I was even the lucky winner of the Scott Pilgrim album on vinyl. I don’t have a record player..but may as well be a trophy for me because I never win anything! lol. I also attended “The Last Unicorn” event with Peter S Beagle- the author speaking and answering a Q and A afterwards. This was so awesome. I have always loved loved this movie and it was … END_OF_DOCUMENT_TOKEN_TO_BE_REPLACED