Film Movement Classics presents Mr. Topaze — long considered a “lost” classic, the film was digitally restored from the lone surviving 35mm prints in the BFI National Archive at the request of the British public. 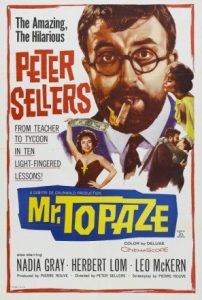 Unwilling to sacrifice his principles, Auguste Topaze (Peter Sellers), a poor but proud French schoolmaster, loses his job after he refuses to alter the failing grades of one of students. Seizing the opportunity to exploit his well-known honesty, actress Suzy Courtois (Nadia Gray) convinces her lover, the corrupt city council member Castel Benac (Herbert Lom), to hire Topaze as a managing director for one of his shady businesses. But when Topaze learns he is being used, he cunningly turns the tables on Benac and makes off with all the money.

A portion of every ticket purchased goes directly towards supporting Orange County’s only nonprofit Art-house theater. Tickets for Mr. Topaze are $12!

“That top-class cast have tons of fun bouncing off each other and there’s a quaint early-60s charm to it all that renders it almost a masterclass in moody melancholia.” — Ralph McLean, The Irish News

I love the Frida, as an avid movie watcher, it’s great to have a place to go where many classic, cult and underrated films are shown. I had the pleasure of attending “The Decline of Western Civilization” screening with director Penelope Spheres doing a Q&A. Her films are so historically important and impacted me at a very young age. I am forever grateful for the experience, like nowhere else would this be possible. I think it’s truly amazing what the staff and everyone involved is doing for the … END_OF_DOCUMENT_TOKEN_TO_BE_REPLACED

LOVE this theater..OMG. I’ve been here several times now for different events. I’ve attended 2 of the 3 Scott Pilgrim events thrown by Cinemattack. I was even the lucky winner of the Scott Pilgrim album on vinyl. I don’t have a record player..but may as well be a trophy for me because I never win anything! lol. I also attended “The Last Unicorn” event with Peter S Beagle- the author speaking and answering a Q and A afterwards. This was so awesome. I have always loved loved this movie and it was … END_OF_DOCUMENT_TOKEN_TO_BE_REPLACED