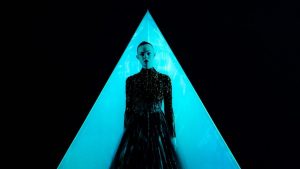 What makes neon so alluring? Is it the distinct glow it projects against the dark night sky? Its plentiful radiant colors? The way it evokes the bright technicolor allure of the future yet somehow also recalls the grungy aesthetics of the past? I believe it’s the contrast neon creates – the contrast between its saturated glow and the surrounding darkness it cuts through – that is so enticing to the eye and inviting of the human imagination. While all the following films offer the captivating aesthetic characteristic of neon lights, their themes are more at home in the surrounding darkness, with each exploring subjects both fascinating and frightening. Let the Neon Nightmare begin…

Originally released in 1977 and later remade in 2018 by Luca Guadagnino, Dario Argento’s giallo masterpiece Suspiria follows young dancer Suzy during her time at a prestigious German ballet school. Suzy’s plans quickly go awry after a series of brutal murders reveal there may be be something more sinister to the dance academy than she originally anticipated.

Having only 8 minutes of film cut to receive an R-rating for American release, the blood flows freely in Argento’s gory classic. Despite its oft-criticized dub, Suspiria offers up screams and squeals alike in equal measure. Bright, bloody, and vivid, it is a dazzling thriller that is as colorful as it is chilling.

If only as much could be true in Harmony Korine’s 2012 hyper-drama, Spring Breakers. Equal parts comical, alluring, self-indulgent, and disturbing, Spring Breakers follows four bored co-eds in search of the ultimate spring break. After successfully holding up a diner together, the group follows their classmates to the beach for sex, drugs, and endless parties, but things take a turn when they meet Alien, a charismatic rapper with a penchant for drug dealing and firearms. After falling for Alien’s charms, the girls think the fun has only just begun, but are proven wrong when their dream vacation slowly transforms into an increasingly dangerous and disorienting nightmare.

Nihilistic yet euphoric, Spring Breakers is a neon-drenched satire bathed in the bright lights of a Floridian spring, with its often-gratuitous imagery a reflection of the gratuitous lifestyle and behavior of the American spring breaker. Like its protagonists, audiences will have their expectations entirely subverted as what initially appears to be a celebration of impulsivity, sexuality, and excess transforms into a much darker reflection on what people would do for just a moment of euphoria.

After a bank robbery gone wrong lands his developmentally disabled brother in police custody, perennial loser and compulsive liar Connie Nikas must do everything he can to make bail, regardless of any costs and all consequences but as his lies escalate and the night continues, so do the stakes. Visually frenetic and emotionally gripping, Good Time introduced many audiences to the same storytelling and visual style that the Safdie’s continued to perfect in their 2019 follow up, Uncut Gems.

Featuring a standout performance by star Robert Pattinson following his transition from Twilight to more “indie” fare, this is the first movie in a long time to have this filmgoer literally on the edge of his seat from beginning to end. A wonderful example of the Safdie Brother’s ability to cast unexpected actors in unconventional roles and extract truly engrossing performances, Good Time is both a nail-biter through and through, and an outstanding exploration of the bond that defines brotherhood.

At times both deeply troubling and visually engrossing, The Neon Demon is peak Refn. Only a director with such a deep appreciation for both the beautiful and the disturbed could create such a dark yet alluring film.

Following sixteen-year-old Jesse (Elle Fanning) as she pursues a modeling career while navigating the dark underbelly of Los Angeles, Neon Demon is a reflection on beauty – the value society places on beauty and the costs that one is willing to shoulder to achieve it. After meeting makeup artist Ruby and fellow models Sarah and Gigi, Jesse is quickly ushered into a brand-new world where appearances aren’t people’s top priority – it’s their only priority. Because of her youth and natural good looks, Jesse’s career gets off with a great start, but she must quickly learn to navigate her relationships, never entirely certain if her beauty is an advantage or another avenue by which to be taken advantage of by others.

The second film in our series scored by Cliff Martinez (and his third time collaborating with director Nicolas Winding Refn), The Neon Demon offers a striking blend of neon aesthetics and synth bangers at times hypnotic and horrifying at others. It might just be the beautiful dark twisted fantasy to perfectly complement our Neon Nightmares.

When small-time mob leader Zhou Zenong (Chinese superstar Hu Ge) accidentally kills a cop, a dead-or-alive bounty is placed on his head, forcing him on the lam from both the police as well as dangerous gangsters out for the reward. Hiding out in China’s densely populated (and deeply divided) Wuhan province, Zhou becomes entangled with a beautiful, enigmatic woman, who has mysterious intentions of her own. Featuring gorgeous, neon-drenched cinematography and bursts of shocking, expertly choreographed action, The Wild Goose Lake is “spellbinding” (Rolling Stone), “brilliant” (Indiewire) and “downright Hitchcockian” (AV Club).

Considered by many to be Noe’s greatest and most striking work, the movie revolves around young expat and Tokyo resident Oscar on a night of drug dealing and drug tripping until an unexpected turn leaves him in an out-of-body experience spanning both space and time. In fact, the film is more than centered on Oscar: the entirety of its runtime takes place in his perspective – either the literal first person perspective of his eyes or his spirit as it soars over the streets of Tokyo and through the annals of Oscar’s memories.

Known just as much for the cinematic experience it provides as the narrative it delivers, Enter the Void is a strikingly beautiful exploration of trauma, the meaning of life, the nature of death, and the concept of rebirth. Presented not only in first person but also a series of impressively long single takes, Noe’s masterpiece is a deeply engrossing film to experience and is unlike any other you have seen before.