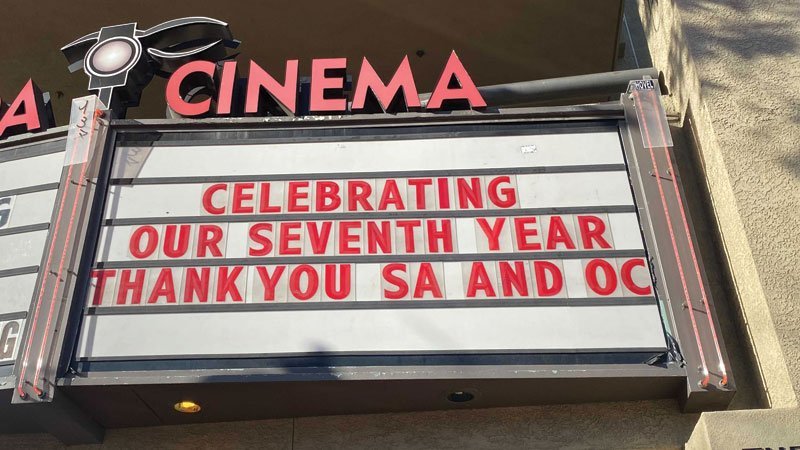 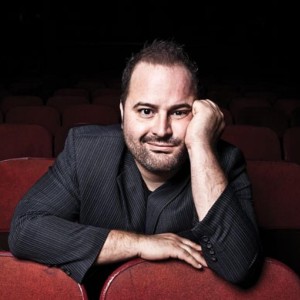 Thank you for seven years!
I’m not gonna lie: after six years of doing something special at our home for cinema every February 21st, this past Sunday was a little rough.  But while our doors may still be closed, this year’s birthday arrived with so much to celebrate and reflect on with deep gratitude — topped off by a truly wonderful couple of weeks.  Starting with our Rocky Horror Picture Show drive-in screening on February 12th, programmer Trevor curated seven nights of outdoor cinema to ring in Year Eight with a bang — and among them, our 100th drive-in event!  All but one of these events sold out, highlighted perhaps by his genius pairing of new cult-classics-to-be Willy’s Wonderland and Psycho Goreman, where he treated our audience to the surprise appearance of Willy’s Wonderland writer G.O. Parsons, director Kevin Lewis, and cinematographer David Newbert. On Saturday the 20th, while a sold out crowd enjoyed Frida audience-favorite Donnie Darko at the drive-in, The Disaster Artist author Greg Sestero joined me for a live viewing of 2003’s The Room, which was accompanied by a lively live-chat by over 100 audience members with a truly impressive variety of burning questions (all of which you can still rent and experience now through Sunday, February 28th!). Exactly one year ago today, neither our drive-ins nor our live-stream would have even been possible.
As I reflect on the truly surreal year that’s been, it’s hard to overstate just how much of an impact your support has made.  And not just simply in terms of helping a nonprofit weather a storm, but in making it possible for families to leave their homes for a safe evening of entertainment from the safety of their cars.  In making possible the impact our streaming cinema titles have made on audiences who’ve had the opportunity to experience the over 200 diverse international documentary, short, and feature films that we’ve presented on our site.  On local independent filmmakers like Matthew Serrano, whose hopes for the big-screen premiere of his debut feature documentary were dashed by the pandemic — only to then be realized with a sold-out drive-in premiere. On the over 300 guests of all ages who were able to celebrate Dia de Muertos as a community at the unforgettable Coco drive-in screening we presented with Viva la Vida Santa Ana and Suavecito Pomade. On three semesters’ worth of college interns who were able to obtain valuable college credit and experience by completing virtual internships with our team, serving as invaluable collaborators through the most tumultuous period of our organization’s history — and every single one of them an absolute hero we won’t soon forget.
Your support continues to open doors to new possibilities — and particularly during times like these, such possibilities can truly be magical.  We invite you to share in our celebration of our 7th anniversary, and reflect on a year brimming with bittersweet victories, incredibly generous host venues, wonderful new community and industry partners, unforgettable nights at the drive-in, and a community whose support of our programming continued beyond the theater to the drive-in and home cinema.  Because of you, we are able to ring in Year Eight with two of the greatest gifts we can hope for — a profound sense of accomplishment, and a sense of tremendous hope for the coming year.
Thank you!
Logan Crow
Executive Director
Facebook
Twitter
LinkedIn