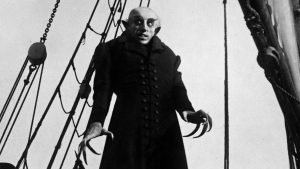 AND, as a bonus! We are including Guillermo de la Rosa’s A NOISE THAT CARRIES. This short film from one of the musicians who composed the new NOSFERATU score, was screened at the 2019 Horrible Imaginings Film Festival. It caused such a visceral gasp from the audience that Sterling and Miguel actually high-fived with joy. This is now a classic festival story. Be sure to watch it in the dark!

PLUS! Watch the Q&A with the musicians after last month’s first screening!

ENCORE! Join us for an encore screening of F.W. Murnau’s highly influential silent horror film Nosferatu, presented alongside a pre-recorded live-score composed and performed just for this special screening, a project assembled by one of our most dedicated supporters, Laura Vasquez of Horrible Imaginings Film Festival!

Written and performed by longtime musical collaborators Dave Taylor (Guitarist, sound engineer and filmmaker), Kevin Yip (Bass player, visual artist and all-around fun lord) and Guillermo de la Rosa (Drummer, writer, filmmaker), this new score applies three years of artistic collaboration to invoke a score that re-contextualizes Murnau’s masterwork, while also underlining the timeless, sinister soul of it’s iconic villain.  As fans of classic horror cinema, and avid consumers of desert rock, 80’s synth scores and post-rock, the Toronto-based musicians agreed to stick to these influences as the main tenets in their rescoring of Nosferatu, employing loose and intentional improvisations to accompany different points in the story. Audience members will be able to watch their live performance play out on a corner of our screen, alongside Murnau’s tale of terror!

Based on the classic novel Dracula by Bram Stoker, Nosferatu stars Max Schreck as the mysterious Count Orlok, who summons Thomas Hutter (Gustav von Wangenheim) to his remote Transylvanian castle in the mountains. The eerie Orlok seeks to buy a house near Hutter and his wife, Ellen (Greta Schroeder). As Orlok’s servant Knock prepares a new home for his master, Orlok reveals his vampire nature to Hutter, who struggles to escape the castle and save Ellen from impending danger…

“I’ve always wanted to rescore a horror movie classic to stimulate imagination and provide a different flavor to a film. When COVID hit last year, I thought this would be the perfect opportunity to pursue such a project to engage artists and our communities during such a dreadful time. When I think of communities coming together, I think of The Frida Cinema.” – Laura Vasquez

I love the Frida, as an avid movie watcher, it’s great to have a place to go where many classic, cult and underrated films are shown. I had the pleasure of attending “The Decline of Western Civilization” screening with director Penelope Spheres doing a Q&A. Her films are so historically important and impacted me at a very young age. I am forever grateful for the experience, like nowhere else would this be possible. I think it’s truly amazing what the staff and everyone involved is doing for the … END_OF_DOCUMENT_TOKEN_TO_BE_REPLACED

LOVE this theater..OMG. I’ve been here several times now for different events. I’ve attended 2 of the 3 Scott Pilgrim events thrown by Cinemattack. I was even the lucky winner of the Scott Pilgrim album on vinyl. I don’t have a record player..but may as well be a trophy for me because I never win anything! lol. I also attended “The Last Unicorn” event with Peter S Beagle- the author speaking and answering a Q and A afterwards. This was so awesome. I have always loved loved this movie and it was … END_OF_DOCUMENT_TOKEN_TO_BE_REPLACED