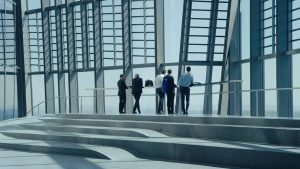 What is money? What are debts? What are the consequences of both? And how can images be found for them? Layer by layer, Oeconomia reveals how the rules of the contemporary capitalist game systematically precondition growth, deficits, and concentrations of wealth. With praiseworthy shrewdness and rigor, director Carmen Losmann articulates in layman’s terms the more egregious aspects of capitalist economy rendered invisible by the prevalent media coverage. Her striking visual concept contrasts the glass transparency of financial institutions with their reflecting, glittering facades, which are almost completely inaccessible to outsiders.

LOVE this theater..OMG. I’ve been here several times now for different events. I’ve attended 2 of the 3 Scott Pilgrim events thrown by Cinemattack. I was even the lucky winner of the Scott Pilgrim album on vinyl. I don’t have a record player..but may as well be a trophy for me because I never win anything! lol. I also attended “The Last Unicorn” event with Peter S Beagle- the author speaking and answering a Q and A afterwards. This was so awesome. I have always loved loved this movie and it was … END_OF_DOCUMENT_TOKEN_TO_BE_REPLACED