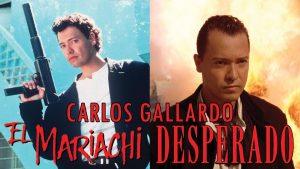 Antonio Banderas stars as the nameless vigilante simply called “El Mariachi,” travelling from pueblo to pueblo on a mission to wipe out drug lords.  When he hits the ground in the small town of Santa Cecilia, controlled by the vicious drug lord Bucho (Joaquim de Almeida), things get hotter than the desert sun.  As all out warfare erupts, the mariachi crosses paths with Carolina (Salma Hayek), an idealistic bookstore owner whose relationship to Bucho complicates everything.  Banderas is at the height of his sensuality in this pioneer of mainstream Mexploitation which features supporting roles from Cheech Marin, Quentin Tarantino, Steve Buscemi, and a dynamite turn from Danny Trejo.

Q&A After the Screening

Sunday’s screening will be introduced by Carlos Gallardo, who will also discuss his experience making the film in a post-screening Q&A!  Born in Acuña, Mexico, Gallardo’s first taste of fame came with the feature film El Mariachi, which he starred in and produced, with the film being directed by his close friend Robert Rodriguez. A critically acclaimed film, it was renowned for costing only $7,000 to make, and went on to become an award-winner at the 1993 Sundance Film Festival. Carlos proceeded to work as an actor and co-producer on the film which would help launch the English language careers of Salma Hayek and Antonio Banderas, Desperado.  Carlos other work includes Once Upon a Time in Mexico, Planet Terror, and Dead Hooker in a Truck.  He is currently starring in horror film Redcon-1, which he also co-produced.

The Academy of Motion Picture Arts and Sciences recognized Carlos’ long time work as a minority filmmaker and honored him with the award Oscar Night America, a recognition from the academy as a Latino filmmaker. In 2012, El Mariachi was given the prestigious honor of being named by the US Library of Congress as one of only 25 films to be preserved as part of the National Film Registry, the world’s largest archive of film, TV and sound recordings.