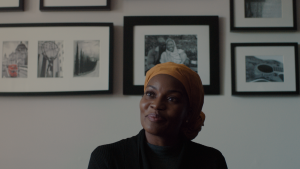 In this collection of six shorts, filmmakers gaze at themselves and their world, attempting to make sense of what they see reflected back. From gripping drama to heart-warming comedy, Our Right to Gaze: Black Film Identities features timely stories from Black artists that take us outside of the ordinary.

Love in Submission
Directed by Lande Yoosuf
Produced by Antu Yacob
Worlds collide when two different Muslim women meet each other for the first time through a mutual third party.

A Hollywood Party
Directed by Toryn Seabrooks
An aspiring TV host encounters her lifelong idol at a Hollywood party but is mortified after the superstar accidentally spits on her lip mid-conversation.

Auntie Zariyah
Directed by Zora Bikangaga
Zach crashes with an auntie he’s never met before and soon finds out that Auntie Zariyah is a 12-year-old influencer.

The Black Banshee
Directed by John D Hay, Jr.
Produced by Kyla Sylvers
Convinced by her friends and boyfriend to enjoy a night out after losing her job, Yvie begins to question her own mind when the visions she’s been having start to have dangerous consequences.

Nowhere
Directed by Lin Que Ayoung
A middle-aged Latina flees her controlling husband for a night of unadulterated freedom.

I love the Frida, as an avid movie watcher, it’s great to have a place to go where many classic, cult and underrated films are shown. I had the pleasure of attending “The Decline of Western Civilization” screening with director Penelope Spheres doing a Q&A. Her films are so historically important and impacted me at a very young age. I am forever grateful for the experience, like nowhere else would this be possible. I think it’s truly amazing what the staff and everyone involved is doing for the … END_OF_DOCUMENT_TOKEN_TO_BE_REPLACED