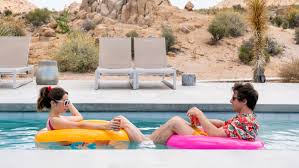 The time loop narrative in film has been made famous from movies such as the classic comedy Groundhog Day and science-fiction film Edge of Tomorrow. So, how does a filmmaker tweak this formula to make it feel fresh? In the new Hulu romantic-comedy Palm Springs, instead of just having one character experience the time loop, he has two characters experience the same day together over and over again at a wedding in Palm Springs.

Like any good romantic-comedy, Palm Springs relies on the performances and chemistry of its leads to hook viewers. Andy Samberg of Saturday Night Live and Brooklyn Nine-Nine fame and Cristin Milioti from How I Met Your Mother portray the film’s leads, Nyles and Sarah, and they easily capture that needed chemistry to get viewers invested in their story.

Samberg has had a hard time breaking through to feature-length pictures as he is mostly known for short projects on SNL and his satire music group The Lonely Island. Yet, his performance in Palm Springs proves that he can carry a story longer than a few minutes. As the carefree Nyles, who had already been stuck in the time loop when the film starts, Samberg easily embodies that borderline nihilistic attitude for comedic effect.

Milioti’s performance in Palm Springs should also serve as a breakthrough in her career after years of mostly supporting roles in film and television. While having that chemistry with Samberg for the film’s fun scenes, she also carries the film’s serious moments as her character feels trapped, by both the time loop and her guilt.

Another notable performance in the film is the great J.K. Simmons as Roy, another character stuck in the time loop. While his character has little screen time, Simmons makes an impact. His scenes establishing his relationship with Nyles provides some of the film’s biggest and darkest laughs. However, his character also has a purpose within the story’s narrative by affecting Nyle’s character arc with his own backstory.

In his directorial debut, Max Barbakow is up to the task of balancing romance, comedy, and science fiction. This juggling of several genres may leave some viewers disappointed at the rate of jokes that most comedies tend to have. However, the humor that is used always hits and usually hits hard.

The film uses the time loop narrative for laughs as the characters are not worried about any consequences because the day will reset. While the film could have gone a little further to elicit a couple more laughs, the characters get into enough hijinks to ensure viewers have a good time.

Along with the laughs, Barbakow and screenwriter Andy Siara make sure to give attention to the film’s central romance and the characters behind it. Despite its short 90-minute runtime, both Nyles and Sarah are both developed characters. Early on, Nyles is carefree because he had already been stuck in the time loop for so long. He feels as if nothing matters because nothing he does matters to anyone else.

Together, viewers get to see how their personalities collide and then mesh as they spend more time stuck together. Viewers see how they affect one another and make each other change for the better, making their relationship one easy to root for. While Nyles initially believes nothing matters, he realizes that was only the case because he was experiencing life alone. With Sarah, even if life is exactly the same, it does matter because he is sharing it with somebody else.

Quarantine life in 2020 feels like a time loop: we’re stuck in the same place every day and time begins to feel meaningless as we wait for things to go back to normal. So with its strong cast, developed characters, and unique twist that produces enough laughs, Palm Springs provides a great viewing experience as we wait for time to matter again. Viewers can now watch Palm Springs on Hulu.

I love the Frida, as an avid movie watcher, it’s great to have a place to go where many classic, cult and underrated films are shown. I had the pleasure of attending “The Decline of Western Civilization” screening with director Penelope Spheres doing a Q&A. Her films are so historically important and impacted me at a very young age. I am forever grateful for the experience, like nowhere else would this be possible. I think it’s truly amazing what the staff and everyone involved is doing for the community. They bring the magic of the silver screen without charging you an arm & a leg to attend their special events/screenings. I highly encourage any film lover to check out the Frida, no matter what film you choose, you will not be disappointed! They have an awesome online presence as well (IG, Website) where you can ask any them any questions or view their monthly calendar. They also host local art shows, film festivals showcasing new artists and film-makers. … END_OF_DOCUMENT_TOKEN_TO_BE_REPLACED