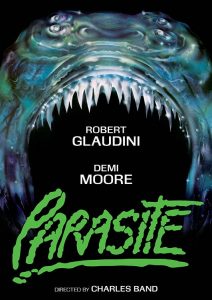 Paul Dean, a scientist, discovers a deadly parasite which can be used for the good of mankind. But some unscrupulous people have other uses in mind.

To prevent his discovery from being put to ill use, Dean destroys his lab and flees, taking two parasites with him, one he keeps in a tin but the other he keeps on his stomach – with potentially fatal consequences. Dean not only has to escape from his pursuers, but he also has to find an antidote to save his life. Featuring Demi Moore.

I love the Frida, as an avid movie watcher, it’s great to have a place to go where many classic, cult and underrated films are shown. I had the pleasure of attending “The Decline of Western Civilization” screening with director Penelope Spheres doing a Q&A. Her films are so historically important and impacted me at a very young age. I am forever grateful for the experience, like nowhere else would this be possible. I think it’s truly amazing what the staff and everyone involved is doing for the … END_OF_DOCUMENT_TOKEN_TO_BE_REPLACED