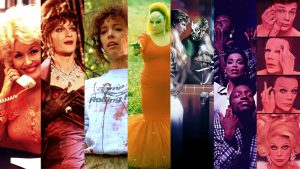 The Frida Cinema is proud to participate in the festivities by presenting a series of classic films over the next month – many in partnership with wonderful organizations – ranging from cult classics that keep LGBT audiences howling decades later, to remastered documentaries that broke new ground in sharing LGBT culture and experiences to new audiences (at long last – Paris is Burning!) to two post-screening live podcast recordings! And of course, catch us (or join us!) in the parade, and visit our booth in the festival! Visit www.prideoc.com/ for more information about this year’s event!

To Wong Foo, Thanks for Everything! Julie Newmar

As part of Pride Week, a series of events hosted by OC Pride in anticipation of this year’s OC LGBT Pride Parade & Festival, flashback to 1995 with this surprisingly poignant comedy classic starring Patrick Swayze, Wesley Snipes, and John Leguizamo!

Throw on your shortest summer shorts and prepare to camp ’til you die! Attack of the Queerwolf’s hosts promise, “The token queers at Blumhouse go through the horror canon to see where on the undead Kinsey scale your faves belong! Don’t be nervous: we’ve done this before! Join show hosts Brennan Klein, Michael Kennedy, Nay Bever, and Sam Wineman at this special screening and live recording event!”

To kick off OC Pride 2019, OC Weekly joins us for a late-night screening of John Waters’ legendary 1972 classic! An epic of unforgettably boundary-pushing visuals, unbelievable “is this really happening” sex scenes, and a singing…body part… – to name just a few of the film’s treats for midnight movie sickos – Pink Flamingos is simultaneously a celebration of identity, chosen family, and unabashed freedom of expression, highlighted by a wonderful screenplay by Waters that balances absurdity with his signature razor-sharp wit.

You might be thinking, “Wait – how is an Elm Street movie LGBT-themed?” Chances are either you haven’t seen it, or a lot of the film’s lines and images went waaay over your head… Allow your hosts at Bombs Away! podcast to illuminate you as they present 1985’s not-so-discreetly-subversive sequel, followed by a live podcast co-hosted by Drag Royalty Isabella Xochitl!

A landmark documentary that we have been eager to present since first opening our doors, Jennie Livingston’s Sundance-winning 1990 film is finally being re-released to cinemas by Janus Films, digitally remastered by the UCLA Film and Television Archive in conjunction with Sundance Institute and Outfest UCLA Legacy Project, with preservation funded by Sundance Institute, Outfest and the Andrew J. Kuehn Jr. Foundation. A vibrant snapshot of the 1980s through the eyes of New York City’s African American and Latinx Harlem drag ball scene, Paris Is Burning offers an intimate portrait of rival fashion “houses,” from fierce contests for trophies, to house mothers offering sustenance in a world rampant with homophobia and transphobia, racism, AIDS, and poverty.

Before Paris is Burning, before RuPaul’s Drag Race,there was The Queen, director Frank Simon’s ground-breaking 1968 documentary which introduced audiences to the world of competitive drag by chronicling the 1967 Miss All-American Camp Beauty Pageant. Now, thanks to Kino Lorber, this landmark film has been restored and returns to the big screen after 50 years!

What a hidden gem! I had such a lovely time at a recent showing of Godzilla (1954). This theater is a bit timeworn, yet undeniably quaint and charming with an unconventional feel. And interestingly enough, the audience served as the sweet element of surprise. Those in attendance created an atmosphere of delight, comfort, and personal acceptance… and get this.. there was an actual host who presented a brief preface to the film just prior to viewing. Very collegiate, which I loved!  All in all pe… END_OF_DOCUMENT_TOKEN_TO_BE_REPLACED

LOVE this theater..OMG. I’ve been here several times now for different events. I’ve attended 2 of the 3 Scott Pilgrim events thrown by Cinemattack. I was even the lucky winner of the Scott Pilgrim album on vinyl. I don’t have a record player..but may as well be a trophy for me because I never win anything! lol. I also attended “The Last Unicorn” event with Peter S Beagle- the author speaking and answering a Q and A afterwards. This was so awesome. I have always loved loved this movie and it was … END_OF_DOCUMENT_TOKEN_TO_BE_REPLACED